How To Confess Your Love 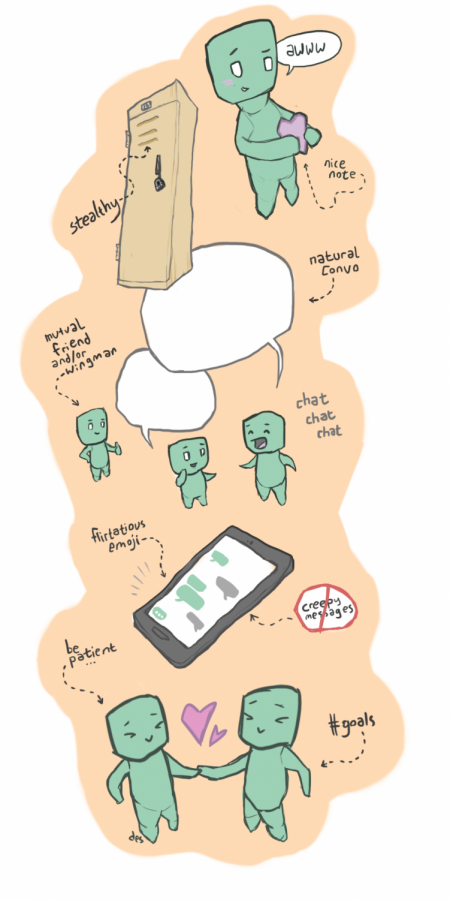 It’s hard to tell your crush you like them. Whether you’ve started having feelings for your best friend or adore someone who doesn’t even know you exist, everyone struggles with articulating their feelings for someone into words. Not only that, but even just the act of telling them and making yourself vulnerable to rejection can be nerve-wracking. Here are some ways to tell someone you like them and not stress too much over it.

1. If you don’t know the person, leaving a cute note in their locker is always a good idea. It may seem a little cliche, but everyone likes to know someone out there thinks they’re cute. It’s not the best approach if you want to instantly spark a conversation, but it’s a nice thing to do if you just want to brighten your crush’s day.

“I think it’s cool.” said junior Chris Ferguson. “Because it’s just a good feeling to have, to know someone likes you. It’s not something you think about often. It’s like, holy sh*t, someone likes me.”

2. If you have a little more guts to strike up a conversation, try talking to them and being their friend. Yes, it may seem impossible, but you have to just give it a shot. What’s the worst thing that can happen just trying to be a friend?

Chances are you have something in common. If they’re in your class, give them a compliment or ask them about some work you guys are doing. Whatever you’re are talking about will branch out into a conversation that isn’t so awkward. After that, you can just casually ask to text them.

3. If they aren’t in any of your classes, it’s gonna be a little more difficult. Try and see if you have any mutual friends. If you do, get your friend to introduce you to them in a group setting, so it doesn’t seem too forced.

Once you’ve met them, just say hi to them when you see them around and work on getting to know them better. No mutual friends? Try to find them on social media and follow them. Start some type of interaction through a compliment, and go from there. The most important thing to do is take your time and not rush or force anything.

4. The most important thing to do when telling someone you like them is being straightforward and honest. Don’t dance around the subject, it’ll only make it awkward. It’s just like ripping off a bandaid. If you stall and hesitate, it’s going to be worse for both of you.

“Honesty is key, just be straightforward,” said junior Ty Martinez. “It’s better if you do it in person and alone too, so if things go bad, at least it won’t be in public.”

5. Doing it in person may seem totally terrifying, but it’s not the end of the world. It adds a more personal tone to it, let them know you’re for real. There’s nothing wrong with texting them to tell them, but some people don’t take texts so seriously. They’ll admire your courageousness if you tell them in real life. You also can’t get left on read in real life.

“I don’t like texts, it would be disingenuous.” said sophomore Kelley White.

It also helps to “rehearse” what you’re going to say beforehand, just so you have the baseline of what you’ll say and don’t let nerves overcome you. Give yourself an opportunity to collect yourself and stay cool.

6. If things go well, congratulations! If they don’t, remember that it’s not the end of your life. It’s going to hurt for a while, but you will get over it in due time. There will be someone else in the future. Things will be okay in the long run, I promise. Romance isn’t everything either. Don’t rely on a romantic partner to somehow make your life perfect, appreciate all the other good things in your life.

Not gonna lie, if it doesn’t go well, it will be awkward. If the person you had feelings for was a friend, the best way to get over any tension and go back to the way things used to be is to just pretend nothing happened. If you make it awkward, it will be.

All in all, just keep calm in all situations and don’t try to rush anything. Love takes time. Good luck!