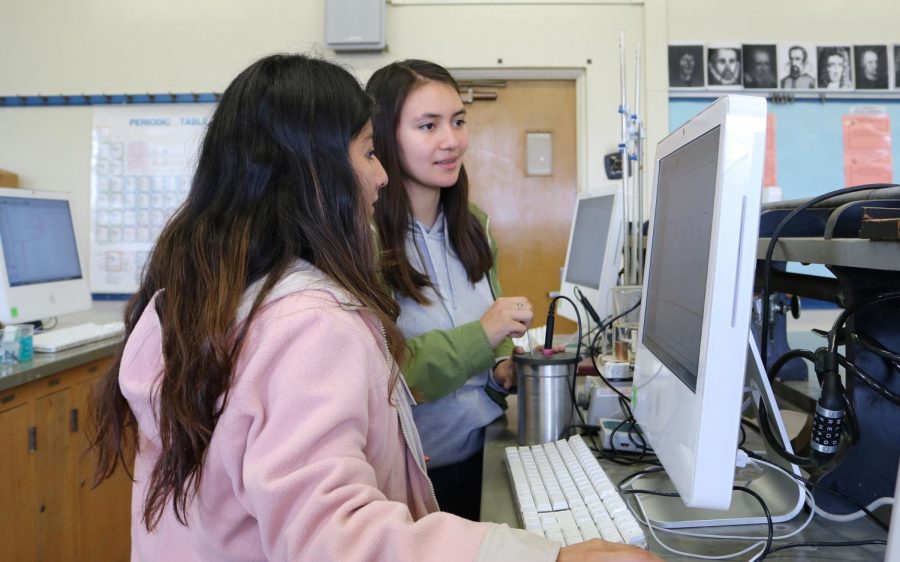 Barry Vella's physics students experiment with the iMac computers, donated by UCLA, and the materials, funded through DonorsChoose Projects.

In January, Chemistry teacher Barry Vella received a set of iMac desktop computers as a donation from UCLA.

“With these iMacs, I will now be able to do maybe seven or eight labs that I wasn’t able to do before, like electrolysis and electrochemistry labs,” said Mr. Vella.

Mr. Vella in the past has received equipment like digital thermometers, PH meters, probes and voltage meters from Donors Choose.

“I’ve been writing grants to Donors Choose since 2010,” said Mr. Vella, “and in 2012 is when my first grant was fulfilled. Ever since then, I’ve had 24 grants fulfilled and more than half of them have had to do with computer equipment.”

“About two years ago a parent came to visit a lab I was doing in AP Chemistry and noticed the old computers we were using; they’re so old that they don’t even receive updates anymore,” said Mr. Vella.

It took nearly two years for Vella to finally receive the computers due to formalities and paperwork that had to be done, but now he is working hard to set them up.

“They work great with all the equipment I have here and I will have them all set up  soon for my students to be able do many more labs in chemistry.” said Mr. Vella.