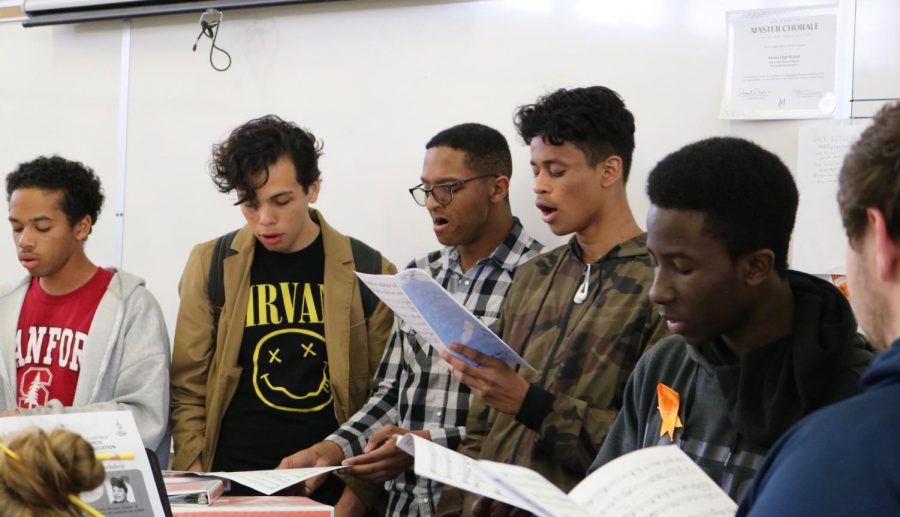 Choir practices during lunch in Shop 7.

The Venice High Allegros are busy preparing for the annual Los Angeles Master Chorale (LMAC) at the Walt Disney Concert Hall on May 31.

On March 14th, representatives of the LAMC came to Venice High School to help the Venice Allegros flourish in their music. A special surprise guest Leslie Beard ( the host of the LMAC) also visited the Allegros. The Allegros will be sponsoring a choir from Africa and singing alongside them in the performance.

Choir Director Wendy Sarnoff is working on an opportunity for the Allegros to travel to China for this summer as part of the Harmony Project film.

Mrs. Sarnoff has sponsored the choir for a total of 26 years. She said she is happy and proud of the members that participate in the club.

“Music is the soul expressed and when I sing I pray twice for the kids in choir,” said Mrs. Sarnoff, “but we also sing for money too, you can hire us to perform for you. We are a professional group and when we sing we just have fun.”

In choir club, students are given the opportunity to apply concepts that they have learned in their vocal music class and apply it to there own music that they create. Many students have produced their own music in the studios and played in performances.

“Choir is a great club to create music and produce it.”  said Abigail Barron, “Choir has helped me to create songs and get lots of feedback to make it better. I’ve personally created a song that’s called “Out Of Time,” I posted it on Youtube, Spotify, Apple Music, iCloud, iTunes, and Instagram. I’ve been in the club for four years which makes me the oldest member, but throughout the years i have met lots of good people that I am now friends with because of the club.”

Representatives from record label companies have visited the choir and offered performing opportunities. Brian Louske is a agent for the Creative Artist Agency and has been giving multiple talks to the choir about how to be successful in music. He has been a great help, according to the choir students. Roy Oldenkamp is the manager of Mob Scene and he also has been helping the choir too.

Holding a part is not as easy as people think. Musicians have to study and practice and make sure they have the notes perfect. Caleb Wade is one of the perfectionist of the club that helps make sure that the members know their part.

“Choir has been an amazing experience, but you have to know your notes for songs and not screw up,” said Wade.

Multiple groups representing  the Venice High Allegros have been formed  and have performed at events. They have caroled around the Marina Fire and Police station, sung at yacht clubs, performed for PTSA board members — you name it, explained singerTy Chavez.

“I have been here for three  years and most definitely grown into a better singer from the first year I came here.” said Chavez. “Choir has taught me a lot of valuable lessons in life such as being able to speak better and have proper speech because sometimes we have to speak and represent for the Allegros and introduce ourselves to the whole crowd.”

Choir is a place for a singer to develop as not just a singer but as a musician.

“I’m the section leader for the altos and I have made numerous friends because of the club, even though its my second year here I developed a lot as a musician,” said Olympia Miccio.

Researchers also have done studies that learning songs in different languages helps the brain learn the language faster and effective, said Mrs. Sarnoff, so students who join choir will gain advantages in language.

Choir meets in Shop 7 during lunch on Mondays and Wednesdays for those who would if you want to join!