Machismo in the Latinx Community 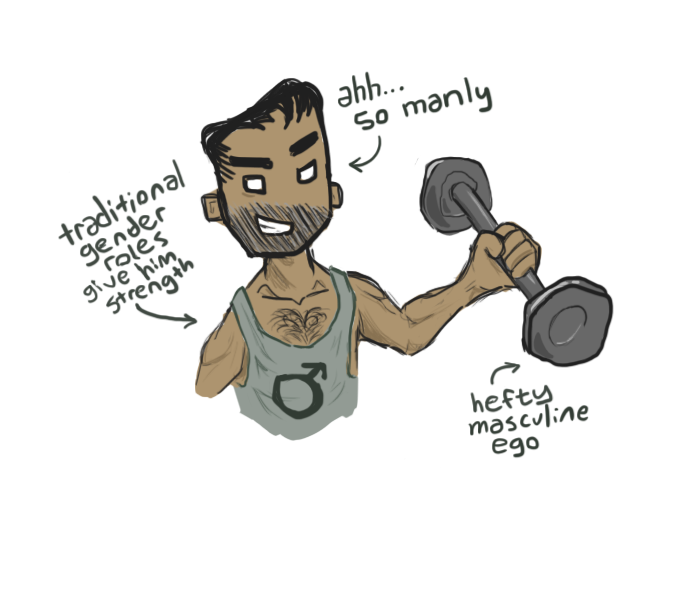 Machismo is strong and aggressive masculine pride within the Latino community. Machismo is men having entitlement and power over women and believing that they are in power and everything has to be served to their needs. But today machismo is outdated and we need to throw it away. It needs to end with us because the future won’t be controlled by men but will be inclusive.

As a Latina raised by Mexican immigrant parents, I grew up with the old traditional roles of women and men. It gets annoying and frustrating when you see your lazy male cousins doing nothing with their lives and your tia doesn’t tell them anything and you have to serve them, clean after them, and do everything for them. On top of everything, your tia gets mad at you if you ask your cousin to heat up a tortilla.
The effects of machismo have been instilled even within the women in our community by raising and preparing their daughters for their next chapter of machismo. I believe that when women grow up in a society where they are raised for marriage instead of getting an education, they get used to serving men and see it as a norm. The cycle of gender roles continues and women begin to teach their daughters the same customs.

Machismo has this great negative effect on women in the Latinx community and has lead to murders of many women. In other countries, women are fearful to speak up because they might get beaten or in some cases wind up dead. El Salvador has the highest murder rate for women. In 2016 alone, 524 women were killed in El Salvador and that’s only those reported, not those that were dismembered in dumps, according to The New York Times article “In El Salvador, Girls Are a Problem” by Catalina Lobo-Guerrero. The article also tells that women can serve up to 30 years in prison for abortion and three out of four sexual assaults take place within homes and seven out of 10 are under the age of 20.
Machismo is not as heavy an influence in the U.S. as it is in Latin America, but it still lives in many Latinx homes in America.

“I feel like being a women in the Latino community is kind of frustrating because you try to better yourself, but the machismo in your own family belittles you as you try to move forward,” said senior Cindy Marquez. “ I especially feel from my mother, as the oldest sibling, she expects me to be my brothers’ and sisters’ second mother. I have to feed them and look after them, and they all depend on me, I don’t mind it but it shouldn’t be necessary for only me to hold all these responsibilities without asking me.”

Machismo does not only affect women but males and young boys as well. Boys are raised to be strong and macho and actions such as crying and showing emotions is feminine and lessens their “masculinity.”

Machismo includes being homophobic and transphobic and doesn’t allow for the queer brown boys or girls in our community to live and breath in their own homes and bodies. The effects of this can separate families because these fathers and men are too prideful and machista to accept the norms of today.
Luckily, as families leave their hometowns in Latin America and raise children in a different environment, such as immigrants migrating to the United States, their children are raised with different standards and influences. Today’s second generation youth are more focused on education more than getting married and finding a husband, and the narrative of machismo is starting to end. Young Latinos are calling out and questioning machismo in their families.
Machismo ruins the ability of women reaching higher. It holds back latinx queer men from being who they are. We need to abolish because the future isn’t all men but it’s intersectional, it includes women, people of color, the LGBTQIA+ community and others. Start ending machismo by calling out your brother, friends and family and educating yourself so you can go beyond limits. Begin discussions with family members about uncomfortable topics to break the culture of machismo.