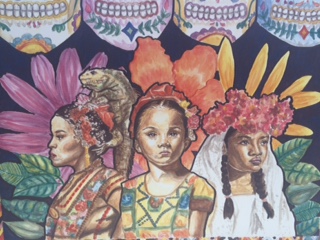 The Media Art Show took place in the Fine Arts building on April 18-20. It featured many pieces of artwork from art students from Mr. Wright and Ms. Fownes’ classes and English teacher Ms. Greene’s class. The Oarsman Report video team was also a part of the Art Show. Their YouTube videos were featured in the video room.

The pieces displayed were on all different mediums. All the art depicted was very diverse and from students from different walks of life.

Ms. Nancy Zubiri planned this event for a year with the Media Academy teachers and especially with the art teachers because they were going to represent the student artwork.

“I liked seeing students vote for their favorite art piece,” Ms. Zubiri said. There was a parent reception on the night of Open House April 18. The event had 30 parents there. Kiev Morales played his violin at the event.

First place winner, Janna Rae Nieto, won for her painting of Oaxacan girls. Second place went to Erick Ponce, for his drawing of Joker faces. Third place was awarded to Tyler Stoner, for her two paintings; one of raccoons and the other a Japanese woman. Mya Gates won fourth place for her piece named “Girls Bite Back.”

“Students get exposure and publicity and others get inspired to make art,” said  Mr. Wright when he was asked about the importance of the Art Show.

“I was surprised that I won. There were many great art pieces. I wasn’t planning to win. I did it for an assignment” for AP Studio Art, said Mya Gates, a senior.