Get Lit Season Comes to an End 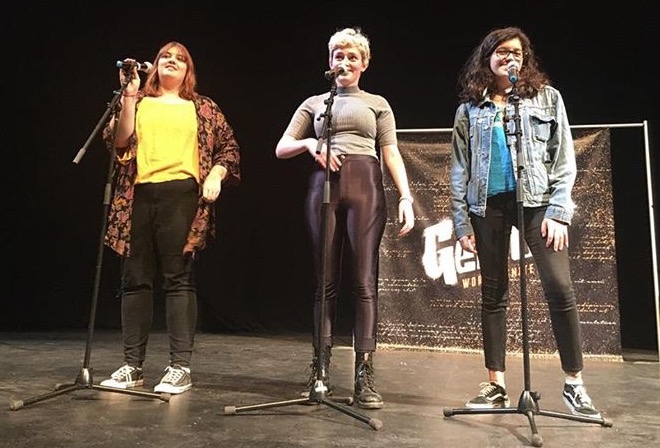 The Get Lit season may be over, but the Venice players went out in a blaze of poetic glory.

On Friday May 25, Venice’s Get Lit team attended Daniel Webster Middle School’s annual Unity Festival as guest performers. Senior Olympia Miccio performed their piece called “The Gay Poem,” which celebrated being a part of the LGBT community. Sophomore Virginia Villalta and junior Emily Johnson joined in with Miccio to perform a response group piece about gun violence called “Four Steps”, which was a response to the poem “The Opposites Game” by Brendan Constantine. Villalta also performed her poem “La Llorona”, which was about her mother.

The following day, the team performed at a book launch event for POPS, a club that retired teacher Dennis Danziger co-founded for students with family in the prison system.

“I love performing, when I was younger I wrote poetry but hated speaking out loud,” said Villalta when asked about how she felt performing. “It terrified me to present in a class or anything like that and now getting to hear that I move people with my words I just love it. I lost my voice as a little kid and now I have it and can be the voice for others.”

“They’re my personal heroes,” said club sponsor and English teacher Ms. Witham about the Get Lit team. “The work they do is giving voice to this generation in really creative and powerful ways.”

The new Get Lit season will start in fall. There will be poetry lunches every Friday in room 152 and eventually after-school writing workshops on Thursdays.

“I really want to encourage people to join poetry no matter what level they are at, because they’ll make friends for life and have a super fun time!” said Miccio on potential new members for Get Lit.

Ms. Witham said “You should just come, poetry is an incredible vehicle to process the beauty and hardship of living.”