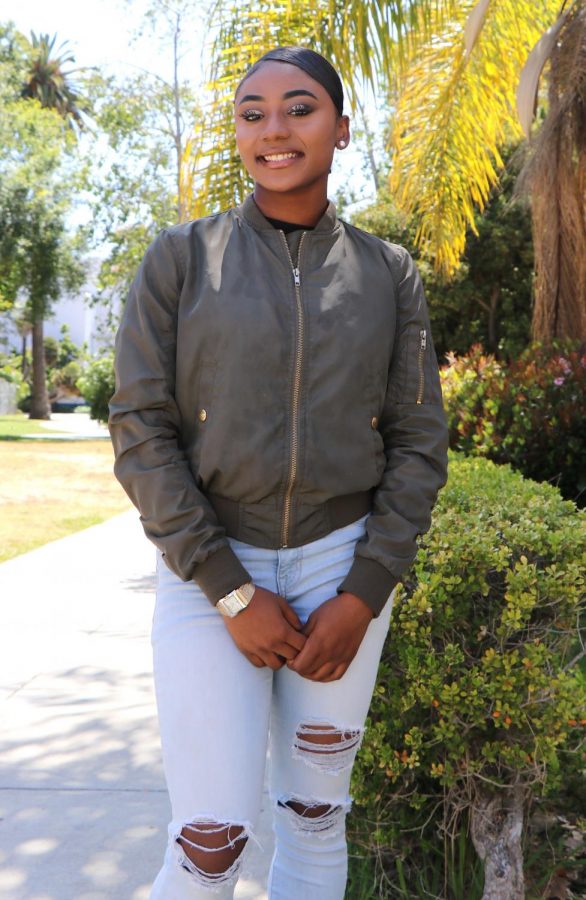 Arshia Smith auditioned for the musical “West Side Story” back in late January. Smith seemed nervous yet confident in her audition. When Ms. Traci Thrasher saw that she was not truly auditioning to her true potential, she asked her to “let loose” and from that moment on, Smith took over the stage with her ballet and mambo dance moves and made it her own.

Smith was given the title of dance captain of the musical and was featured in various dancing solos throughout the course of the musical.

“I’ve been dancing ever since I could remember- I remember my mom would play music and I would just dance,” she said.

Smith was sought out by band director David Lee and was encouraged to audition for a dancing position in the 2017 Rose Parade LAUSD All City honor marching band.

The audition took place at Sereno Middle School. When asked what her feelings were during the audition process Smith replied, “ I was worried and intimidated by the massive amount of girls that were there to audition, there were so many different types of dancers. These girls knew ballet, classical, jazz and I only knew hip hop so I just ended up giving it my all and out of the girls there they ended up picking me. The fact that I got picked was so amazing.”

Last December, Smith had no winter break. The three weeks were spent practicing and preparing for the annual Rose Parade. The practices started from 6:50 AM to 5:00 PM. When the Rose parade took place, Smith had to wake up at 4:00 AM. Aside from these extensive hours of practice, Smith also spent her spring semester practicing for “West Side Story.” The rehearsals lasted from 3:30 p.m. to 8:00 p.m. including weekends.

From her participation in the All City marching band, Smith has also performed for the LA City Rams at the Memorial Coliseum, Disneyland and Band Fest which takes place at Pasadena City College.

“When I’m dancing in general I’m happy, if I’m mad or stressed out, dance is another way I know how to express myself. “ She has also choreographed one of the dances that the Venice High dance team performed at the LA Rams game.

Smith says that whenever she performs she gets adrenaline from the unified voice of the crowd.

She is a part of the Black Student Union and was recently appointed the organization’s president. It is clearly evident that Smith has a very busy schedule and after being asked if at times she finds her responsibilities challenging she replied, “ I realize that in order to participate in a lot of my school based activities I have to be a stellar student, so that keeps me going, also if I’m passionate about my dancing, I’ll make sure I do whatever I can to continue working on it.”

She said she  wants to thank her dance team coach, Joana Trocan- Garett  for always pushing her to do her best and being her biggest support system and Ms.Thrasher who is like her second mom. She also wants to thank her best friends Shara Wade, and Sophia Sanchez for taking the time out of their day to  help her with both the musical and the dance team. “ Without them,” she says, “I wouldn’t be where I am today.”

Some of the awards that Smith has received for her dancing include: Best Female Dancer in theater, medals for best jumps and tumbling in national dance competitions, and best dancer in the Varsity dance team.

When asked what she plans to do during her senior year, Smith mentioned that she wants to be a part of the Associated Student body, be in 2019’s spring musical and she wants to lead her team to victory at JAMZ nationals.

Smith deserves more than a spotlight for all of her hard work and accomplishments. She is the representation of what a successful student athlete is.

If you know Smith, you know that she is very kind. She is caring and will go out of her way to help those in need. She is able to light up a room with her smile and is a natural born leader.

Smith dreams that one day, she will be able to start her own dance company and get a business degree. She wants to expand her dancing by continuing ballet and doing what she loves and does best; hip hop.