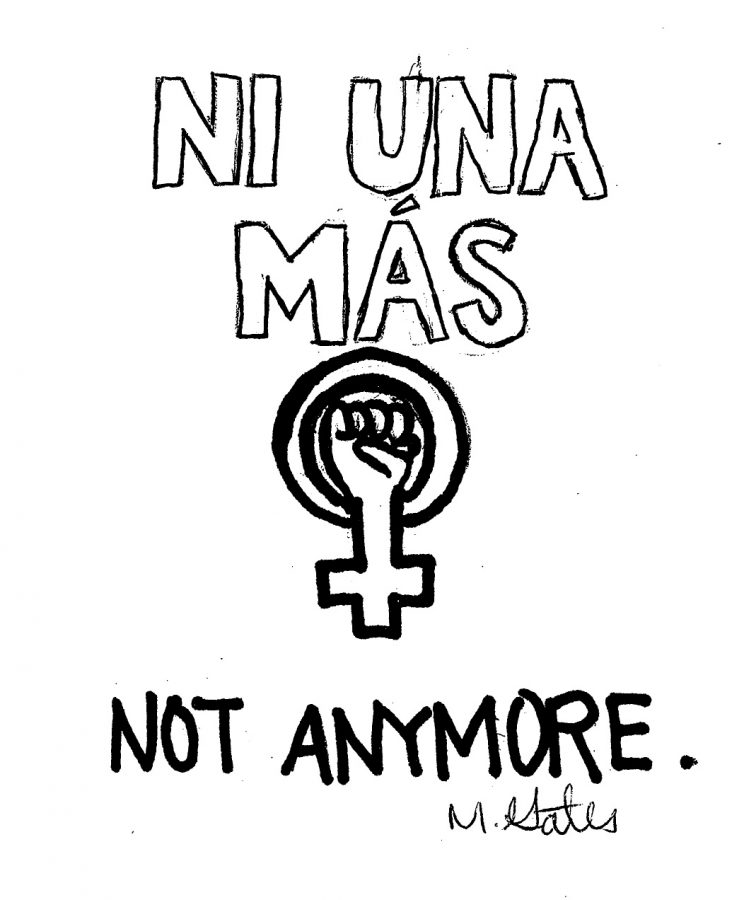 The highest rates of women killed on account of their gender are in many male chauvinistic countries such as Mexico, Argentina, Honduras, El Salvador and even across the globe in India.  Women in these countries are becoming aware and are starting to campaign against the problem.

Last year in Mexico on “Dia De Los Muertos,” many women protested on the acts of sexual abuse and femicide after the death of a 19-year-old woman who used a ride-hailing app to get a ride home in September and was found dead a week later. The women marched around Mexico City wearing traditional Dia de los Muertos face paint throughout Mexico City as they held up posters and chanted “Ni Una Mas” meaning not one more, according to Global Citizen’s article “Hundreds Protest Femicide & Gender Violence at ‘Day of the Dead’ Celebration.”

Around the world there has been numerous accounts of femicide, which haven’t really been talked about or documented since in the places where femicide happens a lot, many men still want to dominate women.

Femicide is not a concept made up by so-called  “feminazis” as some men like to call them. It is an actual act of sexist violence against women. Femicide happens around the world because a lot of men fear what could happen if women were to come to power or be better than them.

The act of hatred towards women is known as misogyny. This word and concept shouldn’t even exist, but unfortunately it does.

According to Global Citizen, in Mexico there has been more than 50,000 killings of women since 1985, a figure which has more than doubled since 2007. Most of these killings take place around the Mexican border, which indicates that not only the men in Mexico kill them, but also Americans who could easily cross and come back into the U.S., according to a report from Global Citizen’s “Femicide in Mexico Has More Than Doubled Since 2007: Report.” Most of the femicide in Mexico is also carried out by gangs. Sadly, only about 1% of these crimes led to sentencing.

Last year in Argentina, there have been an estimated 235 women killed due to femicide, according to the article “Murder and machismo” by The Economist. Argentina called for a women’s protection law in 2009 which would help abolish femicide for good.

Male chauvinism has a big effect on femicide due to boys thinking that women shouldn’t be treated equally. El Salvador currently holds the highest rate in femicide. Like Mexico, femicide is likely caused by gangs. In 2016, 524 women were killed, according to the article “In El Salvador, ‘Girls Are a Problem’” by the New York Times.

El Salvador has tried to form an agreement with a gang known as ‘“Maras” to lower rates of femicide. Every day, 10 women under the age of 20 face sexual assault.

Honduras also has a high rate of femicide due to gang violence and machismo. According to the article “’Men can do anything they want to women in Honduras’: Inside one of the most dangerous places on Earth to be a woman” by ABC News, about 95% of these cases of femicide and sexual assault in 2014 were never investigated.

Latin American countries are not the only countries affected by femicide. India also has a large amount of femicide due to a misogynistic culture. According to the article “5 Countries Where Femicide Is At Its Worst And What We Can Do To Help” by Elite Daily, Indian femicide cases are mainly known as Dowry killings, which is the killing of the woman who was not able to bring enough dowry to her husband’s family.

Many femicide cases involve torturing women such as beating or mutilation before death. Most countries are trying to end femicide by making new laws, but most of them have not been enforced enough to help prevent these horrible actions.

Femicide does not only occur in Latin American countries but in other countries around the world. Machismo has a big effect on femicide due to boys thinking that women shouldn’t be superior. There is no superior gender overall and everyone should be treated equally.

We are free to be who we are and should be able to walk on the streets without the fear of losing our lives. We can help abolish femicide by raising awareness to help abolish the machismo tradition. Keep in mind this happens all around the world.