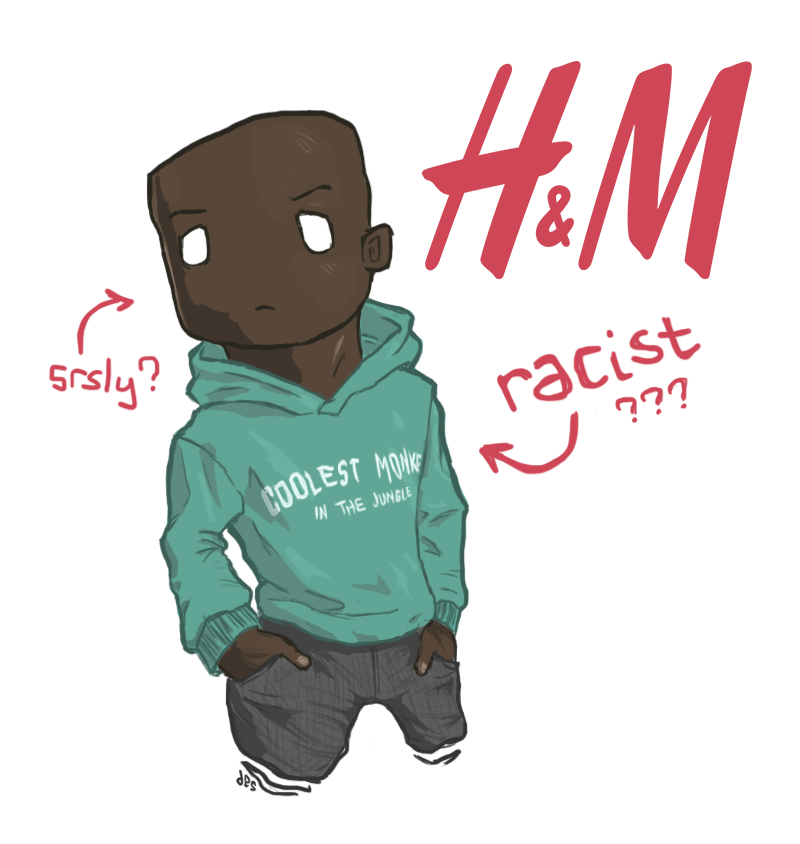 A young African-American model was depicted wearing a hoodie that read "coolest monkey in the jungle."

When I first heard about the little black boy wearing the “coolest monkey in the jungle” hoodie last month, I was enraged, but not surprised. America is now and always has been up to its ears in issues regarding racism. After research and some time to think, I reached a new conclusion. The rage I originally felt changed to irritation. Not so much at the ad itself, but toward the huge amount of attention that it drew.

H&M did not do this on purpose as an act of racism. They’re a huge corporate entity with too much to lose over a petty display of hatred. They issued an apology and hired a diversity manager to ensure that nothing like this happens again.

That being said, this was an incredibly stupid mistake. It’s ridiculous that no one happened to realize the unfortunate connection between the hoodie’s slogan and the race of the model wearing it. Huge corporate entities such as H&M don’t have the luxury of making such mistakes or allowing bad coincidences to slip past them. There’s a certain line that everyone should know not to cross, and the fact that H&M had to hire someone to make sure that they don’t do something dumb again shows how ridiculously ignorant the corporation is. A diversity manager? Really?!

With all of the issues with race that America still has, it’s no wonder that people were offended by the ad. The timing of this event was made even worse if you also consider the Dove ad last October with the black woman that removes her shirt and becomes white. Dove admitted that “it missed the mark in thoughtfully representing women of color.”

Even so, there are far more important current racial issues than some silly children’s hoodie. It’s sad how the important problems are overlooked while people obsess about less important issues. Even the parents of the child that modeled the sweater are not enraged like the nameless Twitter critics and celebrities, according to a video posted on the Independent website.

Not many pay attention to the slavery that somehow still exists today in Africa, but the entire country explodes over a sweater. That, to me, is incredibly sad: that pop culture controversy has become more important than real world issues like the sheer amount of homelessness in America that nobody seems to be paying attention to.

There is no doubt that H&M was very stupid and wrong in this situation, but the insane amount of attention that the incident got and the backlash that H&M has received is completely over the top.