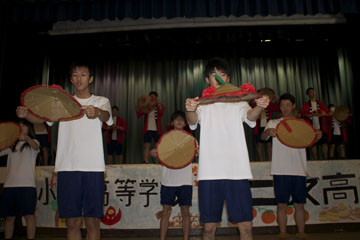 About 90 Venice students taking Japanese made posters welcoming Oguni, which were hung around the auditorium.

Oguni High School students arrived around 9 a.m and were welcomed into the auditorium by Venice students. Assistant Principal Rene Maza made a speech with the help of a translator from Oguni and another speech was given by Oguni’s assistant principal. They then gave each other a memorable gift. Mr. Maza received a calligraphy art poster and Oguni’s Assistant Principal received a decorative plate with both American and Japanese flags.

“It is a token of our appreciation,” said Mr. Maza.

“I think it is cool how Ms. Nomachi brings Japan to us, since we can’t go,” explained sophomore Karla Herrera.

Oguni’s performance was a popular flower hat dance called Yamagata Hanagasa. Venice students got to participate in the dance as well. They received a paper hat just like Oguni’s and began to dance with them. After they were finished dancing ,they all took a group picture together.

Juniors and seniors taking Japaneses gathered up into groups with Oguni students to practice their Japanese, exchange gifts, and take them on a tour of the campus.

When asked about what subjects they liked the most, Oguni students said math, physical education, English and Japanese.

Oguni students were taken to Ms. Wendy (Kornbeck) Sarnoff’s room to listen to some students play the guitar and piano. They were then taken to the football field and trophy case to take some pictures.

The students rejoined one last time in the auditorium to meet up and say goodbye. Venice Japanese students made an arch on the way out the auditorium for Oguni students to go through. Oguni entered their bus and said their farewell.