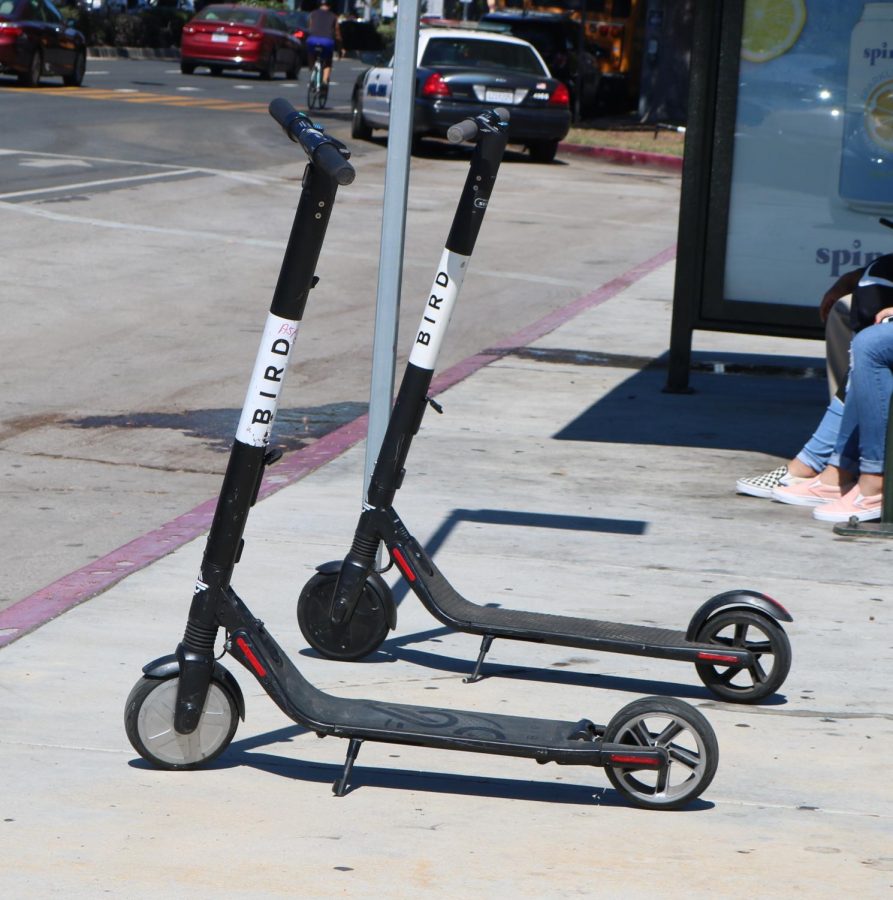 Bird Scooters have flocked to Venice since the spring and have sharply divided opinions. With a credit card and an app, just about anyone can ride the motorized scooters for $1 and an additional 15 cents per minute.

Students can be seen zipping around on them after school, reaching speeds of up to 15 miles per hour.

“It’s really exciting because it goes fast and you can clip your phone to it,” said senior Damien Hernandez.

But not everyone loves the scooters.

spends several minutes every morning before school clearing the scooters from the campus.

Teaching Assistant Charles Feldman feels wide awake the second he gets on one for his morning commute. He said they help him beat the traffic.

“It’s fun and because of the construction it would be hard to find a parking spot,” he said. “I don’t have to worry about finding a spot.”

Several students also ride them to school and teachers sometimes use to go get lunch.

Other teachers are not fans.

Teacher John Bruno, who counted 115 of the scooters in his three-mile commute to work, said they can be unsafe, especially if students don’t follow the rules.

Riders must be 18-years old, have a license and wear helmets according to the rules of the app. They’re also forbidden on sidewalks and two riders can’t share a scooter at once. A credit card is needed to sign up and an app unlocks the scooter. There are always scooters on or near campus even though it is a no-drop zone, according to the app.

“Highway patrol brought in a student for trying to ride one on the 90 freeway” said Dean of Students, Wayne Lewis.

Some students use a parent’s credit card to set up the app and are free to ride them when they want.

Senior Merari Cuarenta was sharing a Bird with a friend in Culver City when a police officer pulled his cruiser on to the sidewalk and stopped them. He wrote a $100 ticket for riding on the sidewalk together without a license or a helmet.

It doesn’t look like they’re going away anytime soon.

Ms. Jones said she’s okay with them as long as the safety rules are followed and enforced.

Fernando Constantino and Sebastian Escobar contributed to this report.