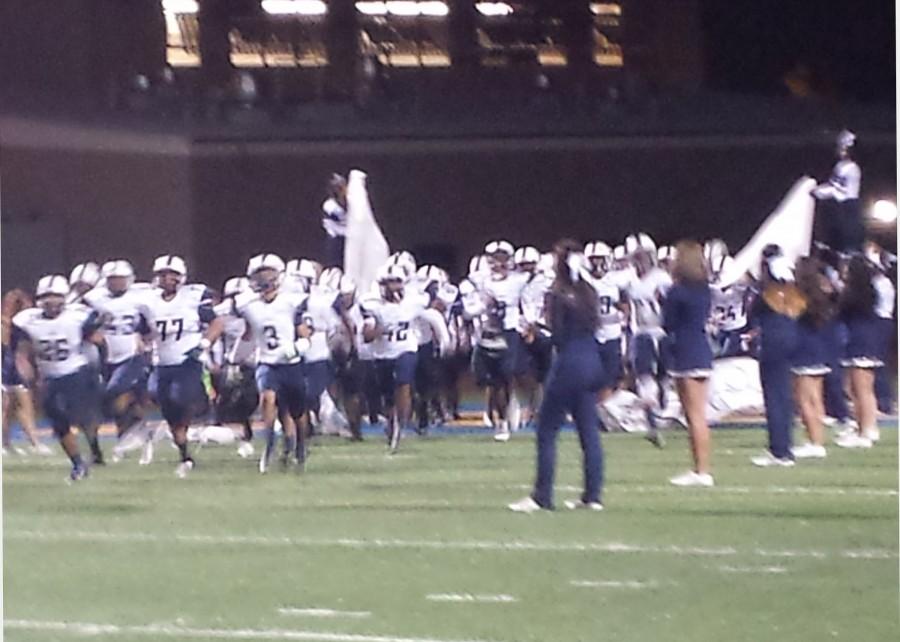 Gondos take the field prior to their playoff game against Crenshaw.

After Venice football ended their 43 game league win streak and handed Hamilton the Western League championship, the Gondos still managed to make the playoffs with a 3-2 league record and a 4-6 record overall.

In the first round of playoffs, the Gondos faced last year’s LA City Section champion, Crenshaw High School on Nov. 14.

Senior Bryant Degrate hoped to limit mental mistakes and execute the game plan for a full 48 minutes in the game.

The Crenshaw Cougars answered back with a touchdown of their own, tying the score. Blosser and his favorite receiver, Dafney, hooked up again for another touchdown, giving the Gondos the lead, 14-7.

Crenshaw started off the second quarter with a touchdown to make the score 14-13. Shortly after the score, Venice got the ball back and Blosser, the quarterback, fumbled the ball, Crenshaw picked it up and ran into the end zone, taking the lead, 20-14. Venice let the Cougars increase their lead to 14 points after giving up another touchdown. To shorten the Cougars lead to nine points and ultimately stay in the game, #12 Alex De La Cruz scored a 35-yard field goal with just 28.8 seconds left in the first half making the score 26-17.

The second half was a complete disaster. Crenshaw scored three unanswered touchdowns, drowning Venice with points, increasing their lead to 46-17 in the third quarter.

“Coach told us at halftime ‘don’t have turnovers’ and in the second play of the half we turned the ball over. We’re not doing our jobs and we’re all a part of it,” explained center Mark Casillas. The Gondos had five costly turnovers during the game, giving the Cougars good field position and more time with the ball. Three of those turnovers were two fumbles and one interception that came from Blosser, the quarterback, and the other two fumbles came from #5 Dejean Parramore, the running back. Venice lost 60-24 and finished the season 4-7.

A week before the Crenshaw game, Venice played Hamilton on Nov. 7 in a Western League championship matchup. “This is the best we’ve played all year and I think we’ll play very well,” said Head Coach Angelo Gasca prior to the game. Venice entered the game with a 3-1 league record and Hamilton was 4-0. With both teams at the top of the Western League standings, the winner would win the Western League. Despite Coach Gasca’s confidence in his team, the Gondos were creamed by Hamilton 25-0.

“Turnovers were the key factor of the loss. Red zone turnovers killed us. If we can eliminate the turnovers, we’ll be able to get something going,” explained #19 Christian Santiesteban.

On Oct. 30, Venice crushed Westchester 48-7. This was the end of Venice’s three-game win streak and the Gondos’ highest scoring league game of the year.

The football team is now in the weight room preparing for next season in the fall of 2015. “We must get stronger, faster, and more athletic,” says junior Alex De La Cruz. “We’ll have many seniors and a good season as a whole.”

“Next year we will be very tough to beat,” Coach Gasca predicts.