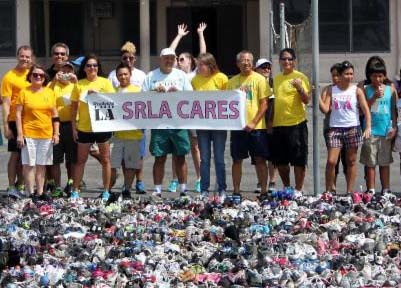 Students Run LA (SRLA) collected 18,302 shoes, including almost 400 shoes collected at Venice, and broke a Guinness World Record for “Most Shoes Collected for Recycling.” SRLA is a group that trains middle school and high school students to complete the Los Angeles Marathon. The shoes were collected in the spring and the record was announced Aug. 9.

The shoes were donated to Soles for Life, a non-profit organization that collects shoes and sells them to an exporter. SRLA is donating the money received from the collection of the shoes to fund the repair and installation of water wells around the world and to fund scholarships for graduating Los Angeles seniors.

After a yearlong process of collecting the used shoes, over 50 SRLA volunteers gathered at Belvedere Middle School and counted all the shoes. The 175 SRLA school groups collected used rubber-soled shoes in their schools and neighborhoods. The groups had shoe drives and encouraged students in classrooms to collect shoes. When the schools with SRLA programs did locker cleanouts, shoes that were found were also collected. Shoes were also collected from local stores and businesses.

The idea for this event came from SRLA Co-founder Harry Shabazian as he was browsing through the Internet. This project was part of SRLA Cares, which raises student awareness and involves them in a process of “giving back” to their community.

The old record of 16,407 shoes was set by National Geographic Kids in Washington DC in 2013.

“Transportation of the shoes was definitely the biggest challenge as it took fairly lengthy period of time (8 months)” to get all the shoes to the collection center, said Mr. Shabazian, according to the Students Run LA blog. “However, I had the level of confidence that we could pull it off…the level of excitement kept growing.”

“We are very proud of the great efforts made by the Venice High community,” said Mr. Smith. “Most importantly not only were we able to help many people, but we also broke a world record.”

Ms. Gutierrez, who is also a SRLA coach, offered her students extra credit for donating shoes. “We are very proud of our students and this project also helped promote STEMM,” said Ms. Gutierrez.