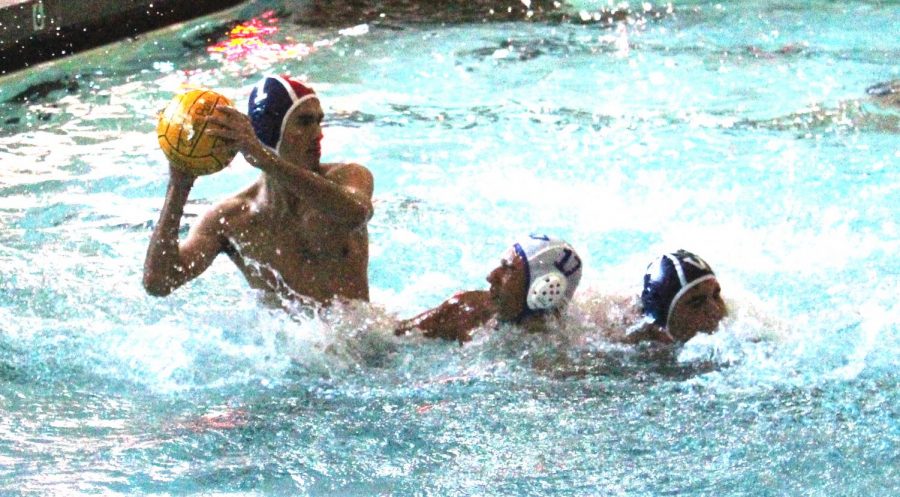 Varsity goalkeeper Kooroush Evagee (#1) getting ready to setup a play.

Despite this unfortunate loss, boys varsity water polo is off to a good start this year, with a 6-5 overall record and is so far doing well in the Western League, standing at 2-1. They look to improve from last year’s record of 9-8, and 6-2 in league.

“So far the season is going great,” said senior captain Nick Scollan. “However, we need to be more aggressive overall and improve on our offense.”

The water polo team has achieved some early success, placing second in their most recent Anaheim tournament which featured many schools with prestigious water polo programs, such as Brentwood School, who they played on Sept. 6. Even though they lost that game, they immediately bounced back with a three-game winning streak.

“We came back really strong after the loss, we executed our plays better, and we were motivated to not lose like that again,” said goalkeeper Koorosh Evagee. “With our team, I was able to gain experience and learn how to position myself to protect the goal better.”

The Venice boys water polo team smoked Banning in the game Sept. 26 and the end score was 20-7.

“Beating Banning was kind of a no shocker to be honest, and our starting line up is pretty good,” said Captain Daniel Escajeda. “ We switched coaches this year, so we kind of got off to a rocky start due to the seniors leaving and the freshman intake. It’s been good practicing and getting my stamina up.”

The boys varsity water polo team plays their next home game on Oct. 17 against rival Palisades High School at 3 p.m.

Kylon Wade and Carmen Perez contributed to this report.