Dealing with Family Issues and Homelessness

Humans of Venice High is a series of photographs and personal histories, revealing the hidden emotions of students. Two Oarsman staffers went around school campus, asking random students if they would mind being interviewed regarding their personal stories. 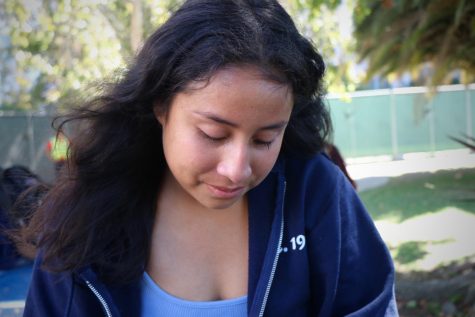 Samantha Pineda. Photograph by Julissa Ventureno for The Oarsman

What is your goal for high school?
“Like everyone, to graduate and make my mom proud, for once. To prove half of my family wrong because they always thought I was going to turn out like a prostitute or a drug addict. Most of my family in Honduras turned out like that. My mom expects more from me. She is usually always mad at me. She focuses more on what I didn’t do than what I did do.”

Are you close to your mom?
“We are not as close as be used to be. We used to be best friends, but we argue a lot now. There was a chain of events that caused that. Like one of my cousins came from Honduras and started to tell my mom lies about me. She said that I was a slut and that I was always hanging out with a bunch of boys and doing drugs.
“None of that was true. She believed her and I guess that’s why we aren’t so close anymore. I don’t know why she wouldn’t believe me. I’ve always been honest with her. Then someone came and destroyed our relationship. If I have a problem at school, I don’t go to my mom anymore. I just don’t tell her.”
Are you close with your brother?
“Me and my brother… we’re close. We don’t fight like most siblings do. We’ll fight over food because he ate something that I was saving in the fridge. We don’t have any other issues. We get along well.
“When we were smaller, we didn’t know he had autism. I didn’t even know what that was. And I remember there were kids that would come around and they knew he had autism and they would call him a retard. It was really messed up, but he was still the same person. They just decided that he was less than them.
“My mom didn’t want him to know. She tried to hide it from him so he wouldn’t feel different. I found out because my dad told me. He doesn’t usually hide things. My mom didn’t tell me because she didn’t want me to think any different of my brother and she didn’t want him to think any different of himself.” 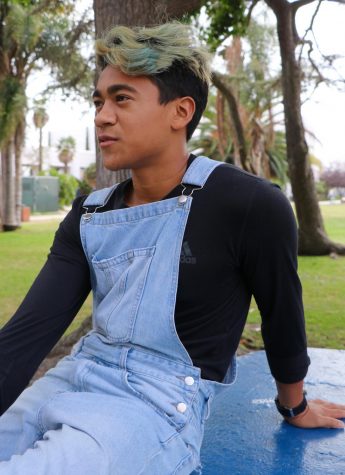 Ty Martinez. Photograph by Julissa Ventureno for The Oarsman

“I want to inspire other people the way I was inspired when I was younger. Because I had no one to look up to, I kind of had to set an example for my brothers even though one of them is older than me. I don’t think he matured the way I did. I have to set an example for him and my little brother.
“I live with my mom and my two brothers. Before, I lived with my dad and mom but they got divorced and had a big fight. I was the only one to see it. My other two brothers were out. That’s probably what kind of pushed me to be more of the man of the house. Sometimes I don’t always show it. I play around too much. But when I need to get something done, I’ll get it done.
“After my mom and dad got a divorce, it was kind of hard for us. We were homeless for a little bit. But then my mom found a job. She could only support herself, so I had to move in with my grandma for a long time for like three or four years.
“My mom had several jobs but they didn’t pay well enough for us to get a stable home. We were kind of jumping around and we had to live in hotels that she worked at for a while. We had to move in with a friend for like a couple weeks. And then she finally found a job. I think it was because of the recession of 2008 that she lost her job, so that kind of set us off.
“She actually got a job after moving around for a while. She could only support herself. She didn’t want us to, but we were sent off to live with our grandma, so she could get a better footing.
“She went back to school while also working full time. She finally found a job after. After that, we’ve been pretty stable.”