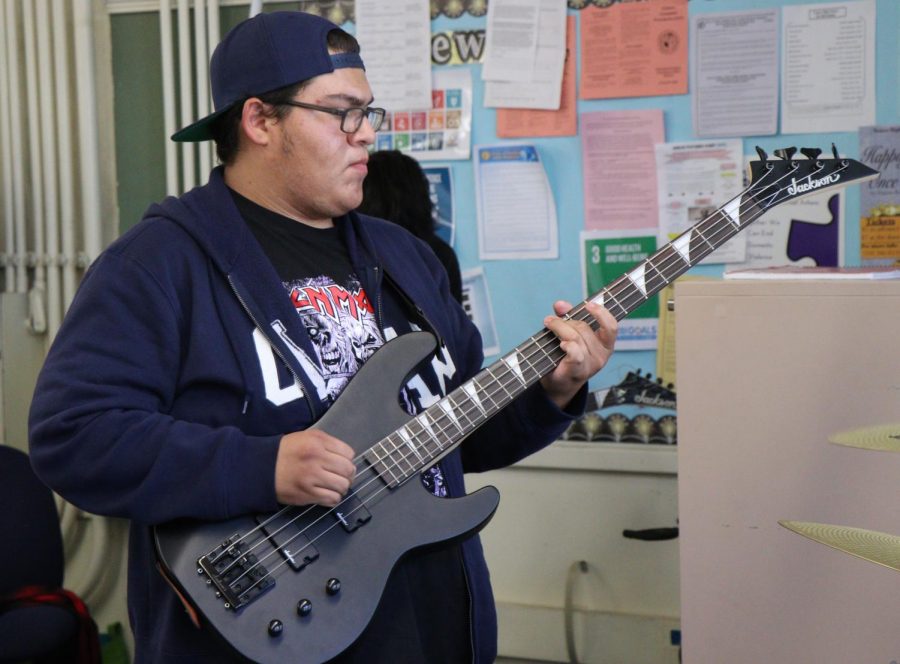 The new Rock Band Club at Venice High School offers the opportunity for students of beginning, intermediate and advanced levels to develop their knowledge and skill with instruments such as drums, electric and acoustic guitar, bass and vocals. Students with no experience can start from step one.

Yaser Vasquez is the president of Rock Band Club. He is a senior who plays as the lead guitarist. He also plays the drums, bass and keyboard. According to Vasquez, the club began with a simple jam session with a friend in teacher Edward O’Connell’s room. They became a club when they invited more friends and started meeting regularly. The club now has 10 consistent members.

“This club is a great place to hang out and jam,” said Vasquez. “We are thankful for Mr. O’Connell because he wants to give everyone a chance to play music. He is in his own band and simply wants to share music with the whole world.”

Mr. O’Connell is a history and government teacher at Venice High. Although he is not a certified music teacher, he knows how to play quite a few instruments. With his musical background, he is willing to teach students all that he knows. O’Connell provides a safe space for those who want to explore their musical talent, particularly in rock.

“We encourage people who have never played anything at all to start from step one to come join,” said sponsor Mr. O’Connell.

Advanced musicians who join can develop music production skills by organizing public productions, which the club hopes to have in the near future, all while earning community service hours by mentoring beginners. The club plans to debut their performances in front of a school audience before playing for the Venice and Mar Vista public.

The club is focusing on covers at the moment but aspires to compose original songs in the future.

So far, the Rock Band Club’s members are hoping to recruit more to join their club. Bryan Paredes, a senior who plays drums and guitar, helped start the club with Vasquez.

“If you ever wanted to get started in music, I don’t think you should wait, you should go ahead and do it. Just do what your heart desires,” encouraged Vasquez.

Sofia Alonso is a senior who recently joined Rock Band Club as their lead singer. According to her, she had never been in a rock band but she is excited to try something new.

“I like singing,” said Alonso. “We are working on ‘Blitzkrieg Bop’ by The Ramones.”

Students are welcome to bring their own equipment or borrow some from Mr. O’Connell. He is trying to organize a show during lunch, once the band is ready to play. In the meantime, the Rock Band Club meets in room 135 during nutrition and lunch almost every day to practice.