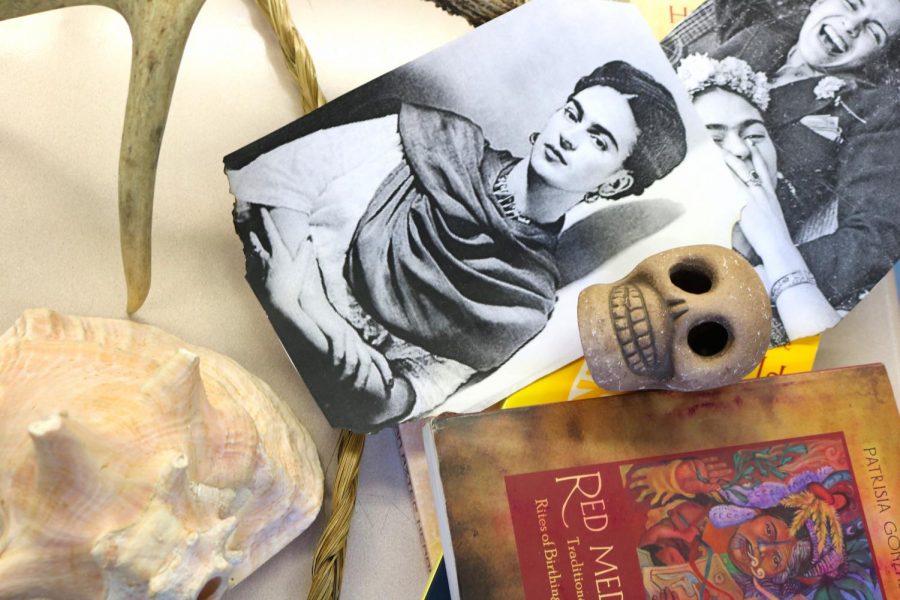 Native artifacts that are displayed in the Indigenous Pride display box in the main building.

On Oct. 8, 2018 Indigenous Peoples’ Day was celebrated alongside Columbus Day.

Columbus Day has been a very controversial topic. Some of the actions that explorer Christopher Columbus and his team did during their voyage, such as labeling the indigenous people as “Indians” and introducing new diseases to the Americas, has sparked debates on morality.

According to editors of the History.com article “Columbus Controversy,” “Columbus and his men enslaved many native inhabitants of the West Indies and subjected them to extreme violence and brutality.”

Some states that celebrate Indigenous People’s Day are California, Minnesota, Vermont and Alaska. Some of the cities that celebrate this day are Los Angeles, Berkeley, Santa Cruz, Austin, Boulder and Grand Rapids.

People still celebrate Columbus Day to celebrate his landing in the Americas. However, the indigenous people have decided to rename the day to give Native Americans their recognition for being the first residents in the Americas.

The only thing Columbus truly did was beginning the colonization of the Americas said Jennifer Calfas, author of the Time Magazine article “Here Are The Cities That Celebrate Indigenous Peoples’ Day Instead of Columbus Day.”

In celebration of Indigenous Peoples’ Day, the M.E.Ch.A club of Venice High School made a display in the main building.

“What we put in the display was different physical objects that have different uses such as the death whistle shaped in a skull and braided herb to bring good vibes,” said senior Axel Hernandez. “We also displayed different native books, ranging from kids to medicine books.”

“We displayed current indigenous struggles such as DAPL (Dakota Access Pipeline) to show how indigenous people still have struggles today,” said Hernandez. “We also put pics and bios of indigenous female figures and their contribution, including queer figures such as Frida Kahlo and Chavela Vargas. We wanted to add more visibility to indigenous women and to queer figures.”

“Since 1991, dozens of cities, several universities, and a few states have adopted Indigenous Peoples’ Day, a holiday that celebrates the history and contributions of Native Americans.” said Becky Little, author of the History.com article “Goodbye, Columbus. Hello, Indigenous People’s Day.”