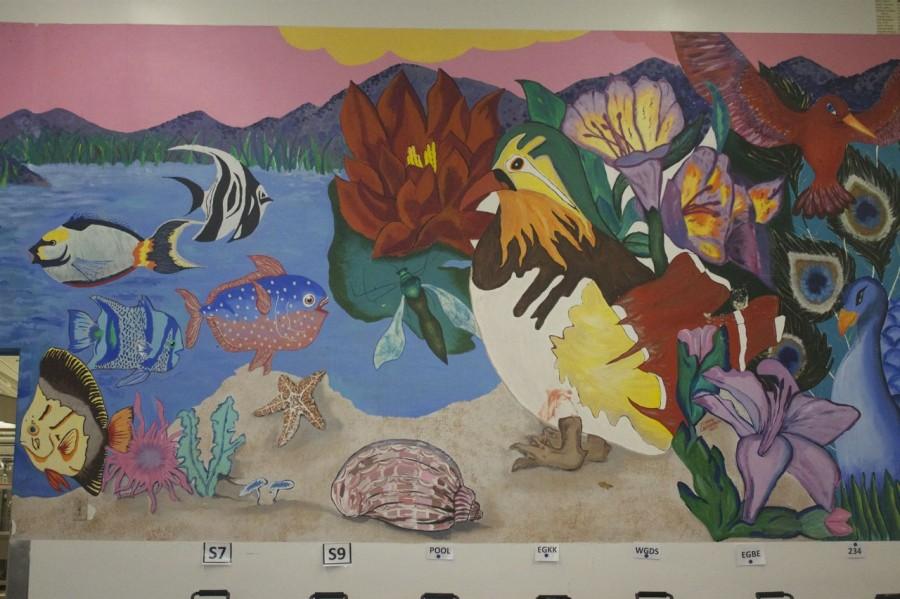 This is located inside the cafeteria.

The Venice High campus contains a variety of beautiful and cultural murals, gifted to the school by a number of artists. Students don’t always pay attention to these murals, although they convey messages that might change our minds if we looked at them more closely.

There are two murals that are located on each end of the school’s library. These two murals were painted by Helen Lundeberg and Grace Clements during the Great Depression era and are titled “Early California to 1800” and “Southern California 1800 On.” They were completed on January 14, 1941 and by the end they measured 12-by-35 feet. It was financed by the Federal Art Project of the Works Project Administration (WPA). This mural was beautifully painted and represents a cultural connection to history for the school.

The Main Building has another outstanding mural on campus. Local renouned artist Rip Gronk painted it on the east side of the Main Building. It features Venice students David Garcia, Andrew Domnitz, Jovetta McQueen, Julie Klein, Lindy Iwashita, Michael Saenz and Aja Thrasher. The mural portrays a gondolier rowing a gondola that has passengers aboard such as nobles and common people alike from Venice, Italy. Everyone who was in this mural was a Class of 2001 Venice High student. In fact, Aja Thrasher is the daughter of theatre teacher Ms. Traci Thrasher. This piece is called “In Canaletto’s Venice.”

Many students notice the mural on the south end of the Far West Building that was painted by Mr. Marco Elliot. Mr. Elliot was a former art teacher at Venice and he painted this piece in 1993. The main part of the mural that usually catches people’s attention is the gun that is near the center of the mural as well as the lovely flower it has on the right hand corner. There is actually a poem in this mural called “Harlem” by Langston Hughes and it talks about freedom. This was painted a year after the riots in South Central occurred and it is titled “Neo-Liberal Greed.”

Another mural that represents the school is on a bungalow just west of the covered eating area. It’s a very colorful piece that shows a Venice gondolier with an oar and is titled “Hotel Venice.”

Inside the cafeteria are two colorful murals that were painted by another former art teacher Joanne Carrabbio who would imitate a French painter named Henri Rousseau, also known as Le Douanier, who was a Post-Impressionist painter. Ms. Carrabio’s piece has sea creatures in it that make the school’s cafeteria feel like it has a more vibrant touch and it’s a very symbolic piece.

“The face of Venice is quite varied,” said art teacher Mr. Christopher Wright. He said the school should have more art that expresses feelings and shows creativity. “I want to paint something that shows what’s happening now,” said Mr. Wright.

“Shake Hands With the World” is the title of another mural, that was repainted in recent years, and shows a group of students of different races and cultures from around the world. It represents a non-profit international organization called the American Field Service (AFS), which is a group that promotes student exchanges, and was painted in 1976. It used to be a foreign exchange student club here at Venice and French teacher Pavlin Lange was the last sponsor of it. This organization still exists all around the world and “has been leading student exchange[s] for more than 65 years,” according to afsusa.org.

Another mural is mostly known as the “Pot of Gold” is located right in front of the two murals on the South side of the Far West Building.

“It’s nice to see something unique and colorful,” says freshman Adam Hesse about Venice’s murals. “Murals are mostly based on a human understanding and a message.”

The Far West Building has a mural in the first floor girl’s bathroom, but it was never completed. Another mural that was half painted is in the girl’s restroom on the first floor of the main building, as well.

The different types of students we have at Venice High should know more about these pieces of artwork that emphasize a message in our history.