The Dress Code Needs To Be Revised 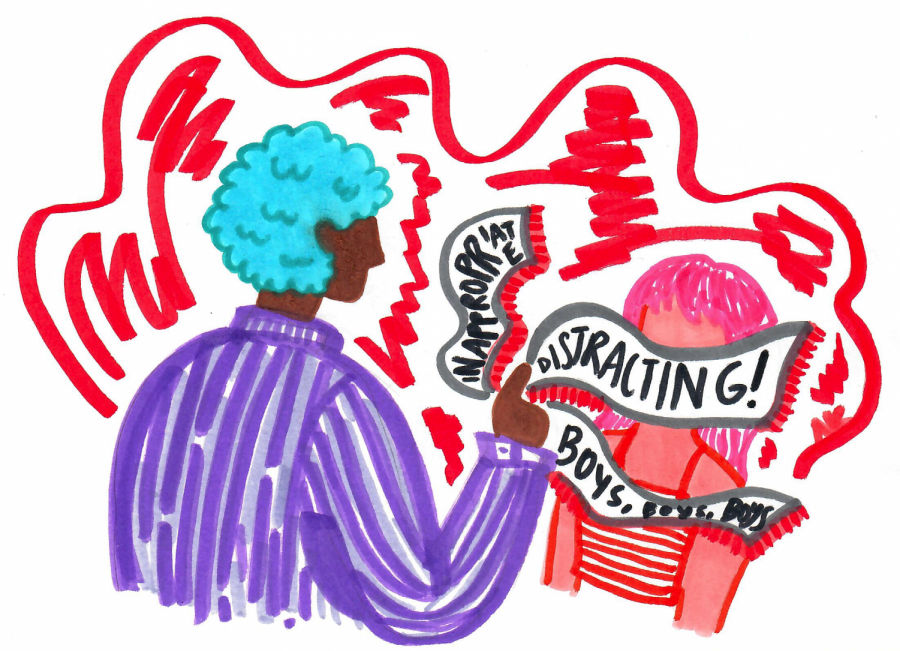 Ever since Dean Lewis made a morning announcement that ended with a comment belittling student complaints about the dress code, the student body has been coordinating efforts to change the dress code. Several clubs, including the Feminism Club and Student Activism Club, have been at the center of this discourse. These clubs and students have a range of demands for the school, but these demands vary among the students involved.

These students should articulate their message for the betterment of all students. The dress code and its enforcement could use modification and it is students who should shape it for the better.

The primary issue with the dress code is its conservative assumption about men and women. It assumes that when young people are around each other, the only relation these groups can have is sexual. As the dress code states, it has no tolerance of “tops that show any part of a student’s stomach (midriff) or excessive bare skin,” implying that the human figure is inherently sexual.

This assumption is an unfounded one, and detracts from the personal responsibility that students have. A dress code based on these assumptions will create tension between the students that it effects. When students are told to avoid articles of clothing because wearing them may be distracting, students who break this rule are assumed to be attention seekers, rather than someone simply expressing themselves.

The warm weather we have had recently justifies students dressing the way they want, whether it abides with the dress code or not. As much as the school administration worries about the effects of inappropriate clothing, a more clear distraction from classwork is students being subject to uncomfortable heat. As such, students would benefit from the dress code being more lenient in the hot California weather.

It isn’t controversial to give students autonomy over themselves. If students were given the freedom to dress as they wanted, they would be able to dress in a way that expresses themselves. While rules against outlandish and visibly disruptive clothes – such as costumes and masks – would be appropriate, clothes that one can wear in public should be allowed for student expression.