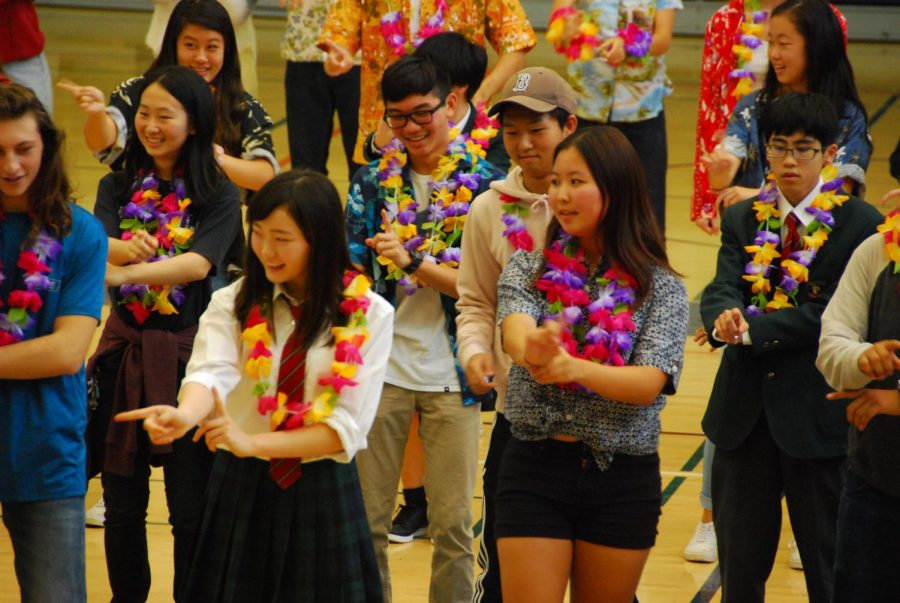 Oguni and Venice dance together in the West Gym.

In the West Gym, 24 Japanese students tried to teach Venice students dance moves in small groups, while the students laughed and joked over their attempts at speaking each other’s language. The dance moves came from a popular Japanese game show.

After practicing for half an hour, the group performed together, adding their own flare as they performed. The ice had broken and the awkwardness lifted. The students became more comfortable with each other, joking and talking to each other like they had known each other for a lifetime.

This scene was part of the Nov. 8 visit from Oguni High School. If you don’t take Japanese as your, 2 year language requirement, then you probably don’t know much about this visit.

This year marked the sixteenth visit that Oguni High School has made it to Venice. Ms. Hiroko Nomachi, the Japanese teacher, was contacted around 18 years ago by a company that deals with exchange opportunities, sparking the connection between Venice and Oguni.

This year’s visit was Hawaiian-themed because senior Kaila Mashita has been doing hula for most of her life and they wanted to showcase that. She performed a solo hula dance in front of everyone.

The schools exchanged gifts, all Hawaiian-themed. Venice gave a hand-carved Tiki and Oguni gave a painting with their school mascot and the wood frame made out of trees from their local forests.

Doren Mansbacher, a senior taking Japanese 4, gave a short speech in front of all the students while Ms. Nomachi cried at his speech.

“I think I was emotional because you see someone growing for four years and they’re finally able to blossom and they are able to show all the fruits of their labor, all the hard work we have put in,” said  Ms. Nomachi.

Higher level Japanese students guided tours around the school while other students organized activities. They visited the Learning Garden and planted seeds in memory of two trees that are going to be cut down. They hula-hooped near the Myrna Loy statue and enjoyed a photo booth. In the Cunningham courtyard, Venice students taught Oguni how to do the hand-jive dance from Grease. They jumped rope on the stage of the auditorium.

“I had a lot of fun and I made a lot of new friends. I also improved my Japanese skills so I can talk to them and have more conversations. I also got the instagram of one of the Japanese girls.” said Via Mariano, a Junior.

They truly gave the Japanese students the Venice experience. As the students became closer, they started to take selfies, get Instagram usernames, and gave each other hugs goodbye.

“Just talking to them and being around them […] that was the best part because they were always so nice and generous,” said Kylon Wade, a senior. ”They always said thank you after everything even if it was not a ‘thank you’ moment.”