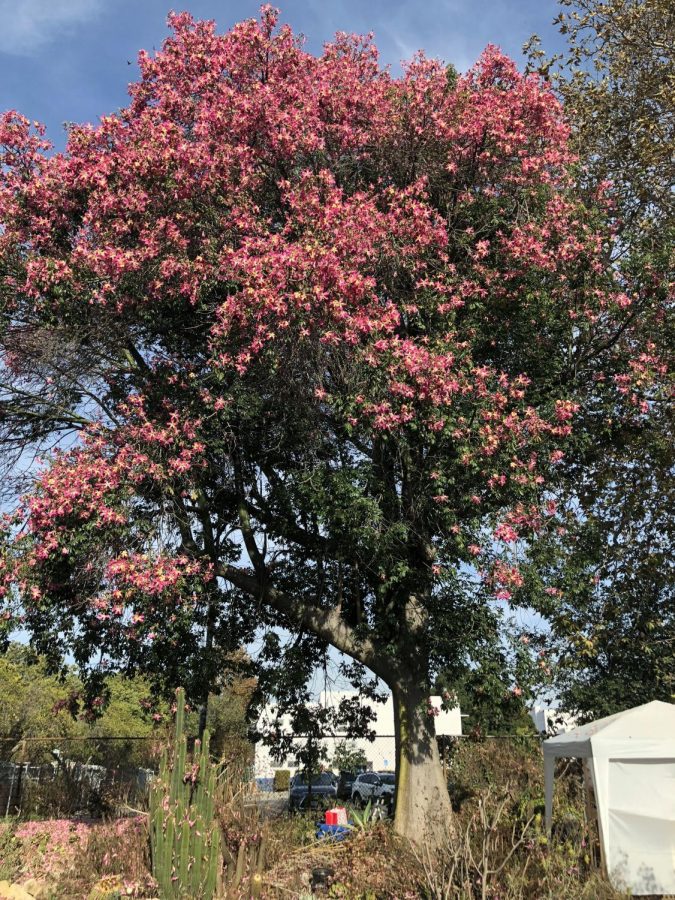 One of the trees about to be cut down.

Last month, Nov. 4, a ceremony was held in the Learning Garden to honor the lives of two ancient trees, each over 100 years old. The sad scene was attended by a mix of students, faculty and members of the community. Everyone attending had heard the news that school-wide construction would also affect the community garden.

When speaking to Ms. Julie Mann, the woman who established the Learning Garden in 2001, she explained the extent of the construction was much bigger than most people think.

“It’s not just the two trees, it’s a quarter of the garden,” she said.

To make room for the new science building, she elaborated, some of the land where the garden stands has to be cleared out. Aside from the land that needs to be removed, four trees also need to be cleared away. The two smallest trees can be moved out of the garden, but the two larger ones will die, because they are too big to be removed from the soil.
There may be a complication to the construction. One of the older trees being moved is a sycamore, a tree protected by the Department of City Planning. While this could delay the date of the older trees being cut down, Ms. Mann was skeptical that it could stop the construction.

“I’m sure there’s all kinds of exemptions and waivers they could get,” she said.

Though the District still doesn’t have a date set to cut down the older trees, a fence will be put up around the trees on Dec. 15.

With this in mind, the ceremony marked the end of a 17-year period of the current learning garden.

“I felt it was good closure compared to what most trees get,” remarked Lauren Gottlieb.

The trees marked to be cut down have stood as long as the school has existed, and the attendees came to honor a legacy they hoped to preserve as long as possible.