Three Holidays From Around the World 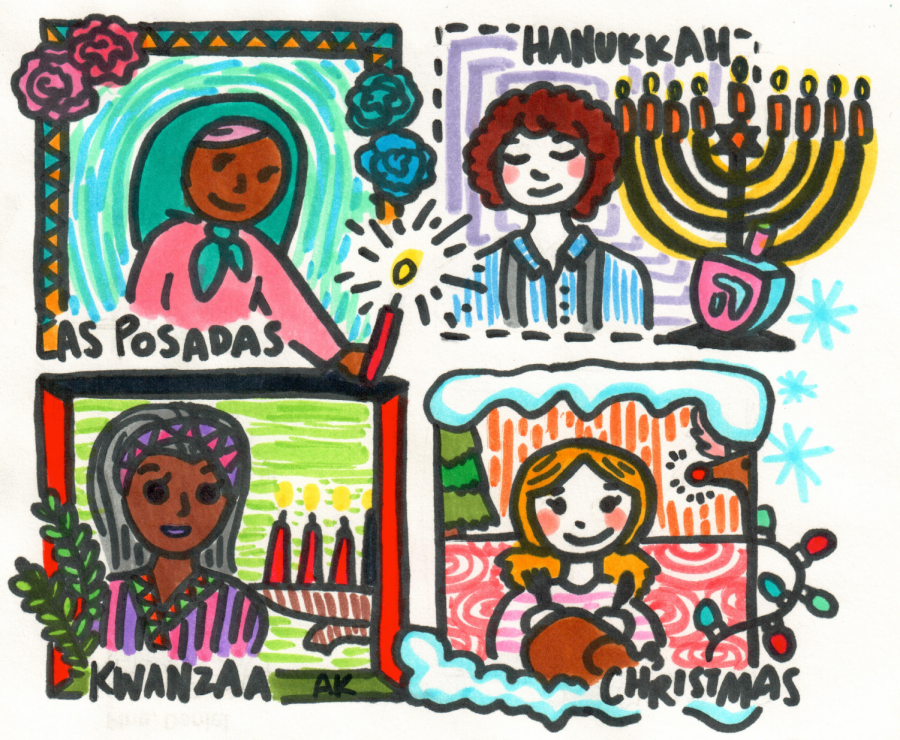 Santa, holiday songs and ornament-adorned trees ring in this holiday season, at least for most Americans. About 90 percent of Americans celebrate Christmas, making it the most commonly known holiday in the US.

Besides Christmas, Hanukkah, Kwanzaa and Las Posadas are also celebrated holidays that are just as festive.

Hanukkah is a Jewish holiday that’s celebrated for eight days and eight nights, beginning on the 25th day of the Jewish month of Kislev. For eight nights straight, a candle is lit. The candle lighting commemorates the oil that was burned for eight days in the Temple after the Maccabees’ victory over the Greeks.

During Hanukkah, gifts are also exchanged within family and friends. A famous dish that is cooked during this holiday is called latkes, which are potato pancakes that are served with sour cream and applesauce.

Just like most holidays, activities and games are included and a famous game for those that celebrate Hanukkah would be playing with the dreidel. With the dreidel, there are four sides and you spin it and depending on the side it lands on, there are rewards such as chocolate coins, known as gelts.

Kwanzaa is a secular festival observed by many African Americans from Dec. 26 to Jan. 1 as a celebration of their cultural heritage and traditional values. This holiday is full of feasts and gift-giving as well.

Las Posadas is a Christmas celebration widely celebrated in Mexico. Las Posadas commemorates the journey that Joseph and Mary made from Nazareth to Bethlehem in search of a safe refuge where Mary could give birth to the baby Jesus. Groups reenact the journey of Joseph and Mary. Las Posadas lasts for the nine days that lead up to Christmas Eve. They are for everyone; neighbors, families, and friends. Famous dishes that are made for Las Posadas are tamales, posole, mole, and much more. Piñatas are famously known to be present for birthdays, but they are also present during Las Posadas.