Theater Review: “I’m Getting Murdered in the Morning” 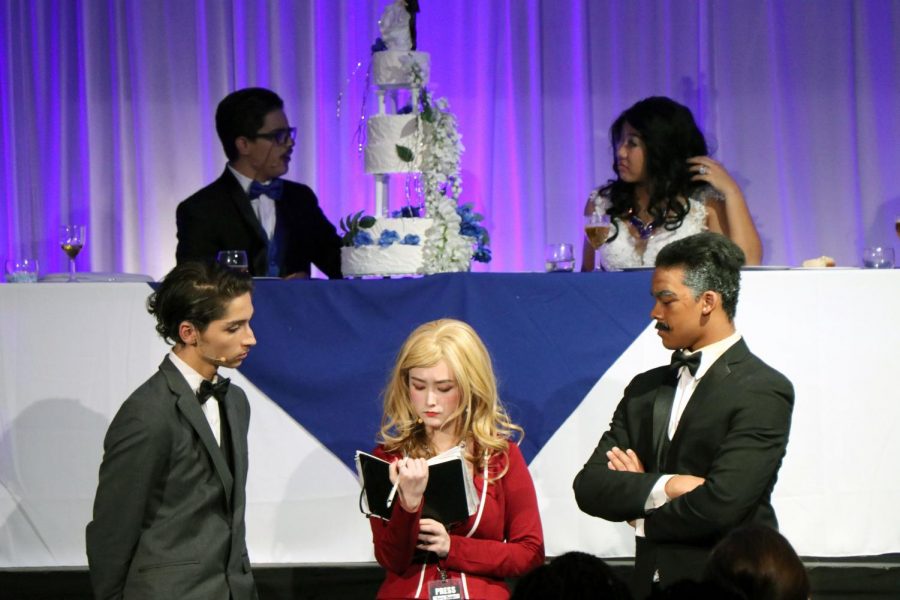 On Saturday evening at the Ristorante Venezia, also known as the student cafeteria, we were invited to the wedding ceremony of Edward Crock, performed by Jaden Aguilar, and Brenda Anne-Marie, performed by Maya Ten. Upon entering the beautifully decorated wedding hall, we took our seats and waited for the beloved groom and bride to arrive.

As we waited patiently, we were given a three-course meal of a salad; an entree of meat lasagna, penne with red sauce or vegetarian lasagna; and a dessert of either vanilla or chocolate cake.

Harold Montague, the father of the bride, performed by Stephen Quinn, comes to the front and announces that the couple is delayed due to their limousine having a flat tire. He is subsequently criticized by his wife Mildred Montague, performed by Paula Diaz.

The married couple soon arrives and the bride starts complaining that she is hungry and demands food. They wait for their food but the bride has a change of plans and decided that it is time to hit the dance floor. By this point the members of the audience, also known as the invited guests, are thoroughly enjoying themselves.

During the time being, a man by the name of A.P. Throckmorton, performed by Jordan Hamano, came to sit next to Ariel and I, which startled us.

The best man Benny Tutwalder, performed by Jesse Fabian, proposed a toast wishing good luck to the former couple. We raised our cups, said “cheers,” drank the bubbly cider and the wedding party continued to dance.

As the single men stood up to try and capture the garter thrown by the groom, Throckmorton stumbled on his feet and began to make his way toward the dance floor. Upon reaching the dance floor, he put his hand on his chest, breathed heavily and collapsed on the floor. He was dead on the spot.

Someone committed murder at the Ristorante Venezia. Who could have caused the murder and what was their motive?

Esther Waters, the secretary of the theater department, said, “I’d like to thank the audience for coming because I know that 30 dollars is a lot but I hope they had fun. They were very responsive and we had a lot of fun interaccting with them.”

Not only that, but during intermission, the actors walked around portraying the characters and chatting with the audience. Audience members were able to enjoy every second of the play; there was never a dull moment.

Fabian, the president of the Thespians, said, “Troop 2311, thank you so much for being amazing and such a great support system, especially my council for always being something I can lean back on, they are the most interesting and amazing group of kids that I ever experienced and I truly wish them the best of luck.”