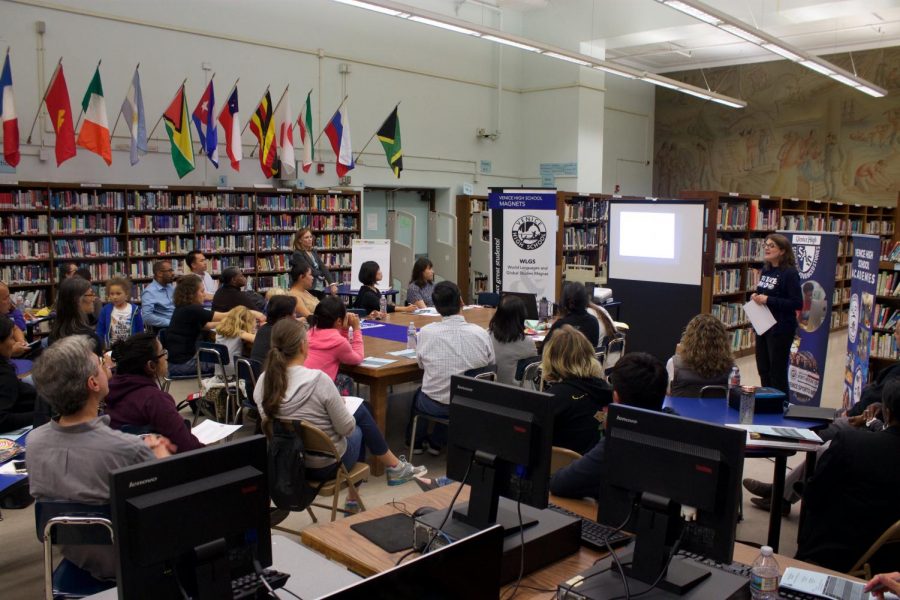 Parents attend an informational session about the upcoming program.

Venice High School will be the first high school in LAUSD’s District West to offer two languages as part of a  Dual Language Immersion Program in the Fall of 2019. Students in the program will be taught two of their six classes in either Spanish or Mandarin.

“I’m very excited to have this new program,” Principal Gabriel Griego said. “It will increase enrollment and it’s great to have this program in addition to our three academies and two magnets.”

Students have been in this program since kindergarten at Broadway, Grandview, Stoner, and Braddock elementary schools. The program was expanded to middle school when these students enrolled at Mark Twain. Next year, it’s coming to Venice.

Parents attended a meeting in the Venice High School library in November to learn about the program.

“It’s a great opportunity. We’ve been doing Spanish immersion since kindergarten and looking for a way to continue that,” said Debra Stolberg, a parent from Mark Twain. “This sounds like a great program to do that.”

“We have a lot of diversity on this campus, and a lot of people speaking different languages, a lot of kids live in different parts of the city,” Ms. Ankers said. “It’s helping people understand that there’s much more than speaking one language and doing things in one way. Venice High School is proud and looking forward to being the first high school with this program.

The goal of the program is for students to learn Spanish or Mandarin as well as a native speaker. This means that they need to be able to speak, read and write in that language and also have a social awareness of the culture, Ms. Ankers said.

At Venice, they will take a Spanish or Mandarin class and the one additional class in that language such as math or history. There are some teachers on staff with the credentials to teach in another language but new teachers may be hired as well, Mr. Griego said.

The program will start out with smaller groups than the academies and magnets currently in place but it is expected to grow as the flow of students from kindergarten through Mark Twain continues.

Currently, Franklin High School is only high school in the district with Dual Language Immersion Program and that is only in Spanish.

“It opens their view of the world, learning Mandarin and other languages,” Ms. Feige said. “I’m really excited about seeing the program go all the way from K through 12. I think it will be a really good experience for them.”

Fernando Constantino contributed to this report.