Album Review: “thank u, next” 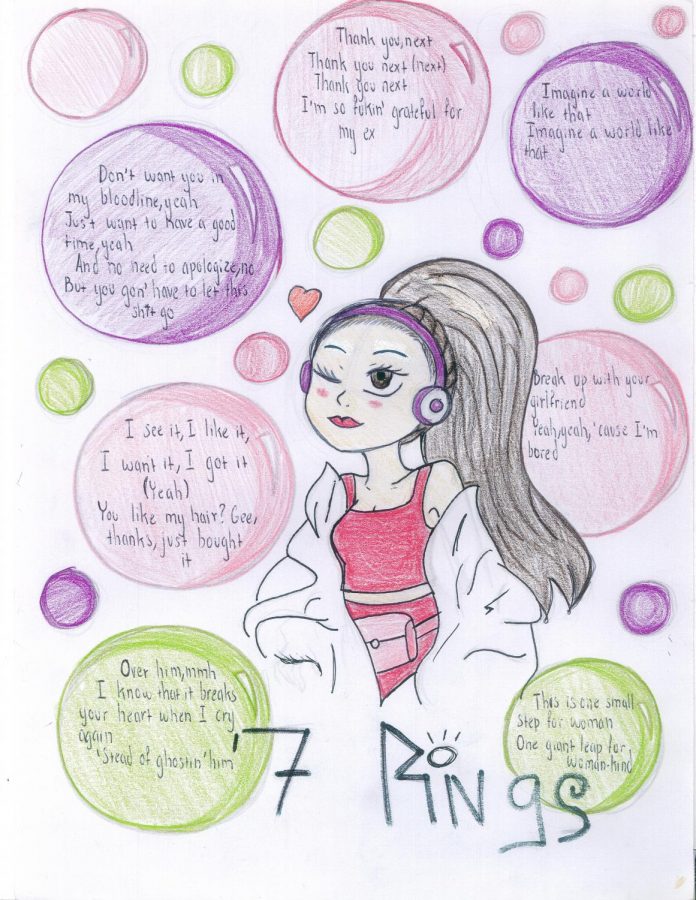 As any die-hard Arianator knows, Ariana Grande’s last album “Sweetener,” which came out six months ago, was a huge hit. Little did we know she had more songs in the making. So say “thank u, next” to her old album; here is her new biggest hit.

Grande goes in depth with her feelings concerning the heartbreaking Manchester bombing, Mac Miller’s tragic death and a whirlwind engagement to Pete Davidson that turned into a messy public split. “Thank u, next” reflects her new determination to move on and keep it spontaneous. Each song, which is in order of most liked has a personal touch.

thank u, next
If you’re trying to get in a pumped-up mood with your besties, then this is a song you’ll truly love. Grande was inspired by the lessons she’s learned from her past relationships. The singer emphasizes self-love and empowerment, saying that she’s been spending more time with herself “havin’ better discussions.”

7 rings
Grande has delivered some really catchy and emotional tunes and all of them, in one way or another, speak to something really personal. Well, her new song “7 rings” is no different. It’s meant to be a friendship anthem, just like “thank u, next.”

break up with your girlfriend, i’m bored
Are you trying to get over a guy? This song is basically talking about how you want someone who’s taken.

bloodline
In “bloodline,” Grande is saying that she doesn’t want this former boyfriend in her family. She’s just trying to have fun and doesn’t plan on taking any relationship seriously.

bad idea
“You can hear all the beats and instruments in the song,” said junior Sabrina Maximo. “It’s weird because you can listen to it when you want to relax or get pumped up.”
Grande acknowledges the song as a way of her escaping the dreadful pain she’s been through in the past months and how she was possibly with someone who was a “bad idea.”

in my head
The song is really about learning to not expect more from people and not tearing them down for turning out differently than you would’ve liked.

imagine
This is a polar opposite from her other songs, as this song is more about a simple, beautiful love that is now and forever unattainable. Grande talks about denial, referring to her past relationships and problems.

fake smile
Out of all the songs, this one has a bit of sorrow regarding the fact that people are possibly hiding their true selves instead of showing who they actually are. For Grande, her celebrity status makes keeping up with everyone’s expectations not as easy, so she puts on a “fake smile.”

NASA
Grande really came for us in this song. “NASA,” a clever bop about wanting “space.” The track starts with a drag queen Shangela’s remix to Neil Armstrong’s iconic quote, saying “One small step for woman, one giant leap for womankind.”

make up– Grande hasn’t talked about the inspiration behind this song, other than Rihanna’s beauty line Fenty Beauty. She showed her appreciation for the products in the lyric, “highlight of my life, just like that Fenty Beauty kit.” But other than that she talks about how addicting it is when you fight in a relationship and then “make up.”

ghostin
This track shows a more emotional and vulnerable side of Grande unlike the savage tracks in the album. The song’s lyrics are very telling, especially the refrain, which appears to be addressed to Davidson.

needy
This song puts a spin on the post-modern social idea that one should be free and independent in a relationship. Being needy is frowned upon now; however, Grande sings that it is okay to feel needed and to want attention and care.