Do Parents Have the Right To Pierce Their Babies’ Ears? 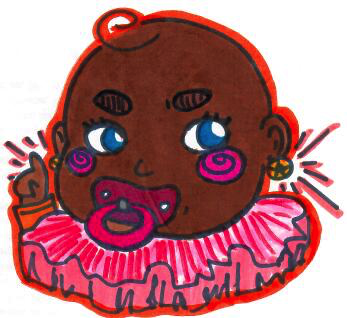 It is a common practice in several cultures for parents to pierce their babies’ ears. However, this has raised controversy concerning both the ethical and medical issues surrounding such piercings. Two staff writers provide opposing view points on the issue.

Yes, parents have this right.

If you were brought up in a Latino household, you probably most likely got your ears pierced before you could talk. There’s no shame in having your ears pierced as a baby,  but it raises an important moral question about bodily autonomy amongst ourselves.

Vilifiers of the practice fail to see the significance and celebration of the event and mistake it for something barbaric and outdated and often tend to overstep their boundaries by insulting the culture as a whole.

When criticizing long-lived traditions originating from groups of marginalized people that have been branded as ‘controversial’ in modern times, it’s important to step back and acknowledge you might not have the experience to speak on said traditions and you should look into the history and significance within their community instead of brushing them off as barbaric, outdated practices, especially if you’re not from a culture where piercing ears is commonplace. Such remarks can come off as racist or classist sentiment coming from a place of privilege, since those with the tradition of performing infant ear piercings are mainly people of color and lower or middle class.

As for bodily autonomy, it is an important freedom to have, but the procedure just seems too minor to make a big deal out of. A baby cannot consent to an ear piercing, but if they choose not to wear earrings later on in life, the piercing hole is barely noticeable within a few weeks of not wearing anything in them.

If you worry about the procedure itself, the procedure is fairly painless when done safely; it hurts just about the same as getting a vaccine and the pain is over within ten seconds. If the child is less than two years old at the time of piercing, chances are they won’t have any memory of the pain at all. There are no extra complications that could happen to a baby getting pierced than to someone at any other age, according to childrensmd.com.

Many people are actually glad that their ears were pierced at such a young age, both for the celebration of their own culture’s traditions and so they wouldn’t have to do it later on in life.

Nadra Nittle, writer for the online magazine Racked, wrote about her ear piercings. “It’s impossible to know how much pain I felt getting my ears pierced as an infant, which is why I opted to get second piercings in college. It felt as painful as a pinch. Then I had my navel pierced … Still, none of these piercings seem as meaningful as my first. They simply don’t connect me to anyone or anything in the same way. They didn’t give my mother, or hers, any stories to tell.”

My own criticism of the tradition, as a Latino, is when the piercing is performed at home by someone unprofessional with inadequate equipment. This heightens your chance of infection or improper piercing placement, which can lead to scars and several holes in your ears from getting them re-pierced so many times. There do tend to be people in Latino neighborhoods known for ear piercing, but they most likely aren’t using safe and properly cleaned piercing materials.

Do-it-yourself piercings get you mixed results that aren’t worth the risk. Pay the small fee and get them done in a professional setting with sterilized tools, which are much safer, faster and less painful than stabbing someone’s earlobe with a hot safety pin. As always, piercings should be cleaned routinely and made sure that the backings are not causing the child any pain.

Another of my own critiques of ear piercing specifically within the Latinx community is how heavily gendered earrings and piercings are. Some parents simply choose to pierce their child so they can be identified as male or female, which is bizarre and unnecessary. Why does it need to be displayed to the world what genitals your baby has? Don’t pierce your child’s ears to enforce a false gender binary, do it because it’s a significant practice dating from the times of our ancestors, and they look great too.

In summary, ear piercing is a beautiful tradition with a rich history amongst so many different cultures around the world and we should support those who choose to keep it alive instead of bashing them for not having traditions colonizers find acceptable.

No, parents do not have this right.

Around the world, traditions exist and are spread as part of a culture and experience. Each tradition varies, with some having bigger impacts. Despite how ingrained and common many of these traditions are, it is important to question the reasoning behind each one and abandon traditions that hinder social progress or conflict with modern sensibilities. Cultural groups grow more progressive and they sometimes leave behind superfluous traditions.

Old cultural traditions must be scrutinized, most particularly, the traditions that surround us and the ones we see commonly including those at Venice.

In the Latinx culture, it is common for female infants and young girls to have their ears pierced by their parents. This tradition is not unique to the Latinx community and there are other cultures in India and Southeast Asia that have a similar tradition. This ear-piercing tradition is very present on Venice’s diverse campus. Due to the pain and potential health risks associated with baby ear piercings, a growing movement opposes the non-medical procedure.

Sophomore Jose Corona, a member of M.E.Ch.A, is one man in the growing number that oppose the tradition. “I’d rather them [the child] choose if they want to or not,” he said. He went on to describe how his one-year-old niece’s parents were already considering piercing her ears.

Senior and M.E.Ch.A. president Axel Hernandez said, “I feel like the child should also have some sort of consent for it.”

While it has no debilitating effects on the infants, the American Association of Pediatricians found there is a heightened risk of ear infection because these children are not able to take care of the pierced site. There are also a host of associated complications with getting piercings, including bleeding, allergic reactions and post traumatic tearing, as found by Johns Hopkins Medicine.

Beyond these medical reasons, there is a very moral reason to not pierce a child’s ears: bodily autonomy. An infant’s body, once born, is their own and that infant can do with it what they want. No good parent should change their child’s body in an irreversible manner, because those parents strip their child of the choice to do the opposite. All people have the liberty to do what they want with their body; this extends to babies just as it extends to adults. Young children can’t give consent, so piercing a baby’s ears should be put off until they are old enough to decide for themselves.

This is not an argument against only Latinx traditions. The same critics are also true of non-Jewish circumcision, which violates bodily autonomy to an even greater extent than just piercing ears.

John Locke, an English philosopher of the seventeenth century once said, “Being all equal and independent, no one ought to harm another in his life, health, liberty, or possessions.” Locke was one of the few proponents for radical bodily autonomy in his time, and his beliefs are as relevant then as they are now.