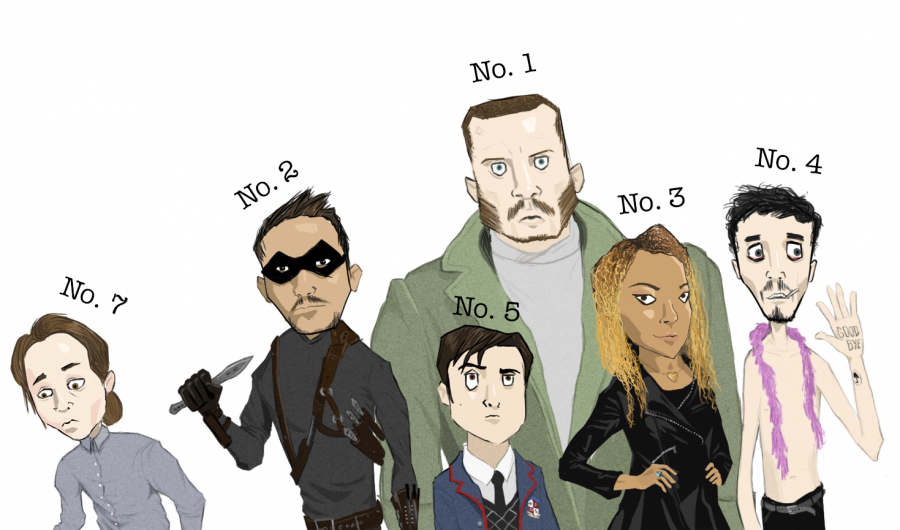 “The Umbrella Academy” is centered on the Hargreeves, a dysfunctional family of seven adopted children with super powers. Their guardian Sir Reginald Hargreeves raised them to work as a team of kid superheroes, known as the Umbrella Academy. However, the team has long since been disbanded and the now adult siblings have drifted far apart.

Luther (Number 1) is an astronaut with an immense stature and enhanced strength. Diego (Number 2) is a crime-fighting vigilante who can manipulate the trajectory of any object he throws—mostly knives. Allison (Number 3) is an actress who has used her mind control abilities to rise to fame. Klaus (Number 4) is a drug-addict who can communicate with the dead. Five (Number 5), who is able to teleport and time-travel, has disappeared. Ben (Number 6) is dead, but still talks to Klaus on occasion. Vanya (Number 7), who lacks powers, resents her siblings for isolating her for being ordinary.

Together they attempt to overcome their messy family dynamics in order to save the world from imminent apocalypse.

Netflix released the first season of “The Umbrella Academy” on Feb. 15. There are ten episodes, each of which is roughly an hour long.

“I’d mostly recommend it to people looking to binge watch a show over a weekend, because it’s pretty quick to watch,” suggested senior Salvador Molina.

The TV show is based on the comic book series of the same name, written by Gerard Way and illustrated by Gabriel Bá. Although Way is best known for his role as the lead vocalist for the band My Chemical Romance, he began his writing career while still in high school, and published his first comic book at age 16. He and Bá published the first issue of “The Umbrella Academy” in 2007,  which subsequently won an Eisner Award for Best Limited Series in 2008.

“It’s not your typical Netflix show where they’re spreading everything out,” said music teacher Mr. David Lee. “It’s very well-paced. Every episode you’re learning something new and it really adds to it, so I think it’s very well presented.”

Nevertheless, “The Umbrella Academy” ultimately fails to distinguish itself in the already saturated superhero genre. Although it is refreshing to see a team of characters who isn’t claimed by the ever-expanding Marvel and DC cinematic universes, “The Umbrella Academy” doesn’t really do anything particularly innovative. Other than Klaus’ ability to talk to ghosts, all the other character’s powers are pretty standard. The character development was a bit predictable and the villains were often more engaging than the heroes.

“It could be better,” said senior Kei Asakawa. “I wish I saw more Ben action and more fighting between the groups of people. Like see more Allison or see more Luther.”

The strength of “The Umbrella Academy” primarily lies in its darker mood and quirky characters. There is a delightful scene at the end of episode one in which the characters each start dancing in their separate rooms to the song “I Think We’re Alone Now.” It felt like a scene out of a Wes Anderson movie. It would have been great if subsequent episodes continued with such a whimsical flair.

Criticisms aside, “The Umbrella Academy” was still very much an entertaining ride. If the show is renewed for a second season, there will hopefully be more room for a deeper exploration of each character along with more team action sequences.