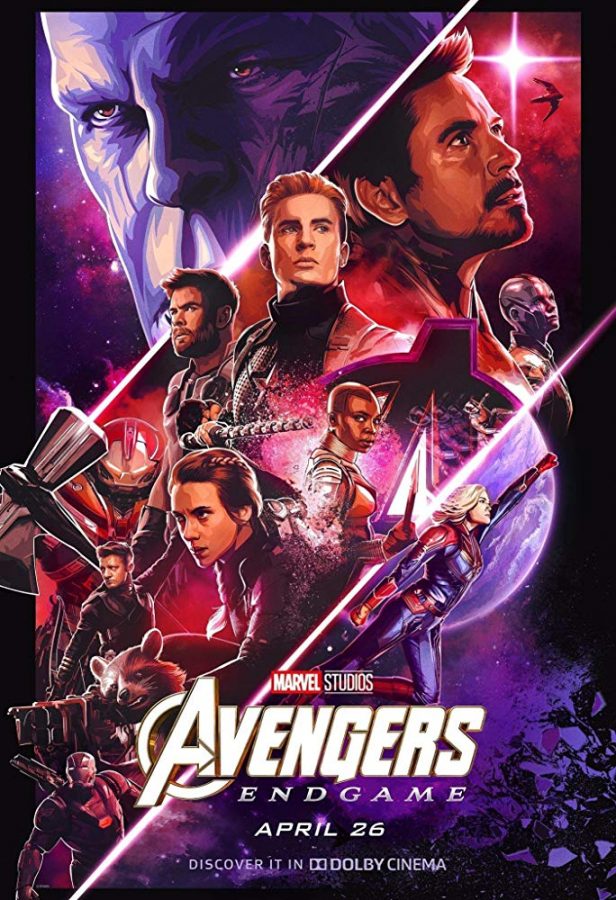 Poster for "Avengers: Endgame" (Fair Use)

After the mad titan Thanos (Josh Brolin) wiped out half of all living organisms in the universe with a snap of his fingers at the end of “Avengers: Infinity War” (2018), the remaining Avengers look for redemption in “Avengers: Endgame.”

The majority of the new movie takes place in 2023, five years after the snap. The Avengers are still trying to figure out a way to see if they can undo the snap and bring back those who “died” from it. As a result, some of the heroes come back to life at the end of “Endgame.”

A lot of fans are heart broken with the fact that Robert Downey Jr.’s Marvel Cinematic Universe (MCU) career seems to be over. His dedication to the role has truly been appreciated by fans worldwide.

Downey played Iron Man, more commonly known as Tony Stark, who developed greatly over the past 11 years of MCU films. Stark started off as a very arrogant and selfish man who didn’t care about others. He even called himself a “genius, billionaire, playboy, philanthropist” in the first Avengers film. He fell in love with his assistant, Pepper Potts, and they eventually got married and had a kid together. He has been through hell ever since. He had a big fallout with one of his best friends Steve Rodgers (Chris Evans). Stark also decided to take in Peter Parker, aka Spider-Man, as his trainee to be an Avenger one day. And after Spider-Man (Tom Holland) died from Thanos’ snap, Stark was heart-broken and couldn’t live with the fact he let Peter die.

In “Endgame,” with seemingly all hope lost, Ant Man (Paul Rudd) shockingly returns from the Quantum Realm. Ant-Man is hilarious throughout the movie since he acts like a child in an adult’s body. He goes to Captain America and Black Widow (Scarlett Johansson) where he proposes the idea of traveling back in time to retrieve the powerful infinity stones to potentially bring back the heroes. They immediately go to Iron Man to see if he will help. After serious consideration, he agrees to join them. These heroes gather up with others like emotionally scarred Thor (Chris Hemsworth) and a now smart Hulk (Mark Ruffalo).

Eventually, they are able to retrieve all six infinity stones to revive everyone who was killed in the previous movie. Thanos time travels forward into 2023 where he tries to steal the stones. This leads to an insane 45-minute long fight scene where all of those who had died from the original snap return to help fight.

At the end, Iron Man sacrifices himself and snaps away Thanos and the rest of his army.

However, other characters could have snapped without dying to keep Iron Man alive. Possible candidates are Black Panther (Chadwick Boseman) who has a suit that absorbs energy and transfers it so he can use it when he fights. Another character like the Winter Soldier (Sebastian Stan), who has a replaceable metal arm, could have also snapped. It seemed liked Iron man was destined to save the day like he has in previous Avengers movies.

Senior Andy Godinez shared his thoughts about who else could have used the gauntlet to perform the snap.

“I feel like Thor could have snapped, since he is basically the strongest Avenger and a god,” said Godinez. “But also Captain Marvel could have done it since she seems indestructible.”

Another shocking development of “Endgame” was the death of Captain America. Known as Steve Rogers, he is the first Avenger. He has not only been a symbol for America, but for the MCU. He has shown strength and honor more than any other character. Before his death, he was able to pass his iconic shield to his friend Sam Wilson, aka Falcon. This is a big change for the MCU, creating a black Captain America.

“Endgame” provided a lot of clarity regarding the future of the MCU.

There is most likely going to be a “Black Panther 2” and a “Doctor Strange 2” coming out within the next year, according to an article released on March 29, 2019 on DigitalSpy.com. Production for “Guardians of the Galaxy Vol. 3” has already began. Marvel is also going to be on Disney’s new streaming service, Disney+ (releasing November 2019), that will feature shows with characters like Loki and Falcon.

The Oarsman recommended viewing order for the MCU movies are: