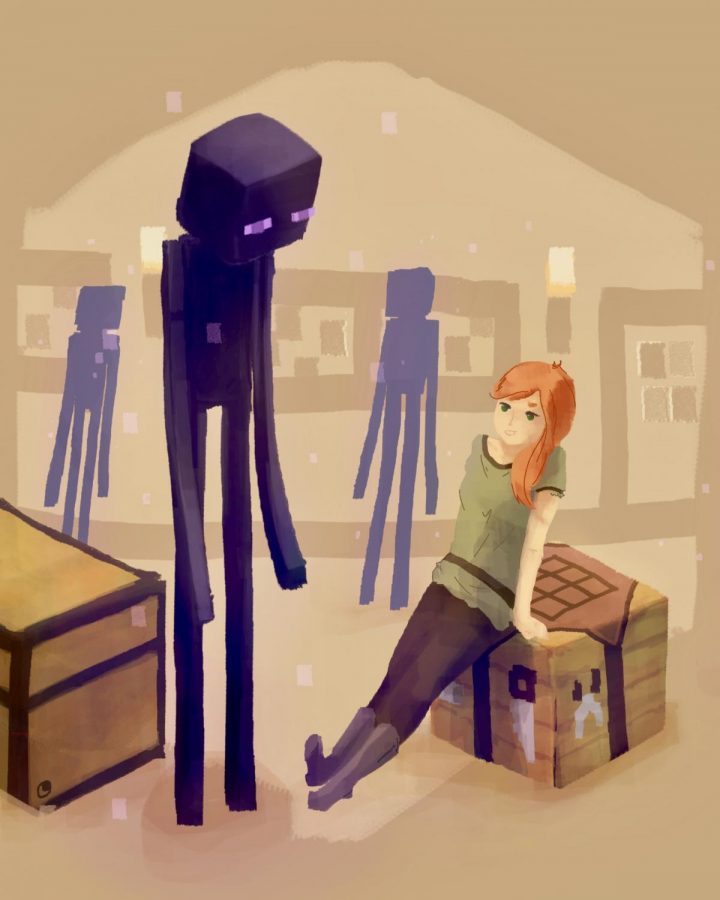 The video game Minecraft has just hit its 10-year anniversary May 17, and it has had a massive spike in its player base in the past months. Minecraft never really stopped having a large player base, which was 90 million monthly players, but the audience was mostly composed of younger children ages 14 and under, while older gamers found fun elsewhere. But now, people of all ages are returning and many new players are joining in on the fun.

Minecraft is a sandbox game where the player places building blocks and goes on adventures. You can choose to fight monsters, go on crazy adventures, just make a house and survive, or do a little bit of everything with friends. You can also choose creative mode instead and create your ideal world with unlimited possibilities.

Minecraft was created in 2009 by Markus Persson, more commonly known as Notch. He worked on the project alone for quite some time before he was able to build up a development team for the launch. In 2014, he sold Minecraft for $2.5 billion to Microsoft. Notch has gotten a lot of backlash for his transphobic tweets and other controversial views he holds. Minecraft has since distanced itself from Notch by saying the company doesn’t agree with his views and they have removed his name from the title screen.

Minecraft has been evolving in different ways and the changes are not just affecting younger players, but players around the world. Minecraft has worldwide fame, being the most-sold game in history with over 176 million copies sold, which Microsoft announced on may 17.

Some of the causes of the resurgence of Minecraft are Fortnite and Apex Legends players getting tired of the repetitiveness and communities of those games. Nostalgia is also a factor in the game’s comeback. People remember simpler times like coming home and playing with friends on the Xbox 360 or staying up late while listening to Minecraft parodies like“Fallen Kingdom” or “TNT.”

Many things have changed in Minecraft. There are lots of new mobs, items, texture packs, commands, and game play mechanics.

One thing that has never changed is its amazing soundtrack by German musician C418. People who used to play the game will immediately recognize the soundtrack and will have a connection back with the game. Minecraft’s soundtrack brings many emotions to the player, whether it be tranquility or a sense of exploration.

We interviewed Venice students about their opinion on Minecraft.

“I haven’t played it a ton, but I definitely love just the idea of Minecraft but when I played it, it was definitely relaxing and it helps bring community with me and my friends and even my family like me and my dad would sometimes play together,” said senior Gryffin Maurer. “I knew about Minecraft before it was super popular. Like in fifth grade, I was friends with the super nerds and we would talk about Minecraft when it was first coming up and I always thought it was really cool, even though I didn’t have a computer to play it on.”

“Minecraft, for me, is like a way to hang out with friends and do some cool things with them,” said senior Megan McCallister. “I was definitely a lot more into it when I was younger, but recently I’ve been starting to get back in and start up a server with friends and stuff, so it’s kind of like a past time I suppose.”

Growing up without the newest phone or the best selling game made me always feel like I was left out with the world around me. But one day at this summer camp a few guys around my age were playing this game. Of course I wanted to fit in and know what all the hype was about. I asked what game they were playing and someone gave me a response, “Bruh, you don’t know? We’re playing THE Minecraft. Bro, hop on.” Ever since that day, my life has never been the same.

When I was 9, I was fortunate that my family had a computer in our garage. I would watch Youtube quite a bit whenever I was bored and one day I happened to stumble upon Minecraft videos and instantly fell in love with the game. I remember begging my parents to get me the game and it eventually worked.