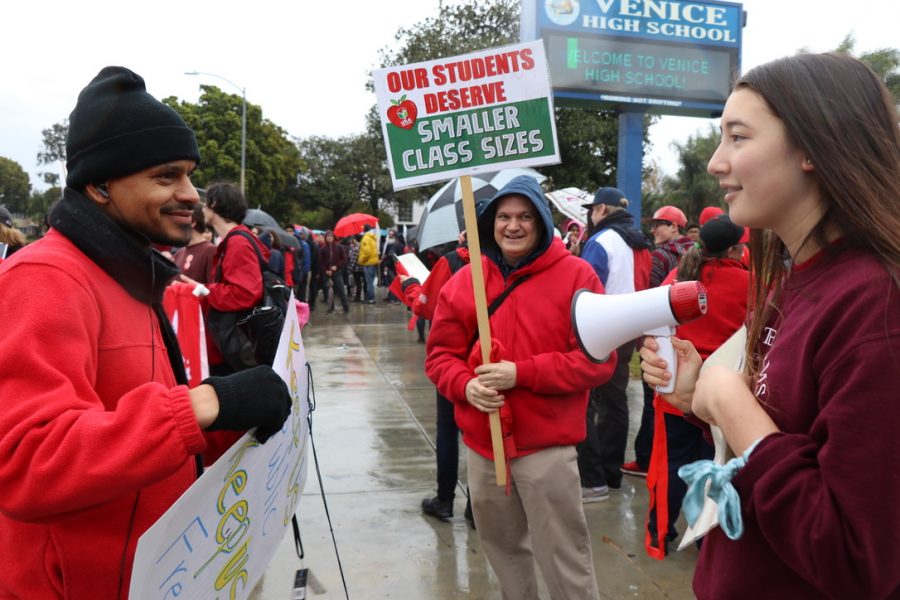 If you go to a school that is a part of the Los Angeles Unified School District, you probably know that UTLA is LAUSD’s teachers union dedicated to making sure workers in schools are given the rights they deserve. UTLA, which stands for United Teachers of Los Angeles, was created as the merger of the American Federation of Teachers Local #1021 and the Association of Classroom Teachers of Los Angeles to better represent teachers in the district, according to their website, UTLA.net.

Venice High is very involved in UTLA. In fact, every teacher at Venice High School is a member, according to Union Chair Soni Lloyd, and they meet every Thursday at lunch to discuss union matters.

Venice High School social studies teacher Mr. Lloyd is running for President of UTLA this year. He announced his campaign in early August along with the creation of a group known as the Caucus of Rank and File Educators in Los Angeles (CORE LA). Mr. Lloyd is running for president with the primary goal of informing and educating the public on the issues plaguing public schools and how the current administration of UTLA isn’t solving these problems.

“The current Union power is too traditional and isn’t producing results for schools,” said Mr. Lloyd in an interview regarding his candidacy. “I’m trying to bring a more visionary perspective to the table.” Mr. Lloyd seeks to challenge the higher powers at UTLA who he believes do not realize the answers to fixing our struggling public schools.

Some of Mr. Lloyd’s most important ambitions and promises as president are to prevent charter schools from undermining public education and to index wages to recent inflation. Mr. Lloyd also seeks to improve teacher’s jobs, including a decreased workload, fewer classes, and better pay, as well as bringing back custodian jobs to help overworked and understaffed custodians in schools.

Cecily Myart-Cruz is running against Soni Lloyd as his opponent in the election. Myart-Cruz has been the Vice President of UTLA/NEA for the past 6 years, and has been a teacher for 22 years, teaching in numerous middle and elementary schools. According to Myart-Cruz’s biography on the UTLA website, Myart-Cruz has worked with the community and schools to get rid of corrupt principals collaborating in the “lemon dance” of transferring under-performing teachers, as well as boycotting periodic assessments in defense of over-tested students, and bringing programs to schools. Myart-Cruz is running to replace the current president, Alex Caputo-Pearl, while Caputo-Pearl is running as Vice President to replace  Myart-Cruz.

Mr. Lloyd has received support from the students of Venice High School, many of whom have classes with him.

“He seems very interesting… like he cares about his students,” said Daniel Sarni, who is a student of one of Mr. Lloyd’s AP US Government classes. Lloyd was referred to as “a very legit candidate,” by Thomas Koon, president of the LA Students Deserve club, who protested with teachers of UTLA earlier this year. Many students also agree with Mr. Lloyd’s goals, such as increasing teacher’s wages. “They don’t get enough pay for the work they do,” said Luke Titan, student and member of the Venice High School STEMM Council.

You can check out more of Soni Lloyd’s campaign as well as the organization he created with other teachers known as Core LA at www.corela.education. The election for president of UTLA will take place on Feb. 5, 2020.