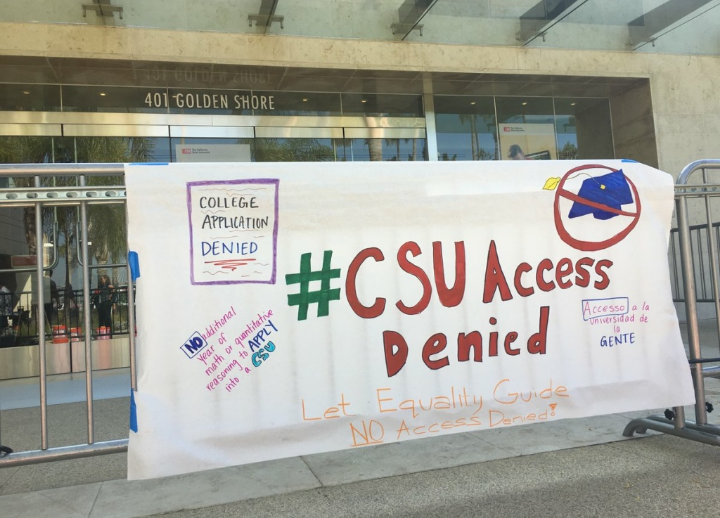 It seems as though people like me, Afro-Latina and low-income, just can’t catch a break. It seems as though the odds are against us. After every opportunity is a barrier. The next potential barrier for low-income, Black and Latino students, starting in the fall of 2026, will be the addition of a math requirement for all Cal State University freshman applicants. Now a fourth year of high school math will be required.

We are always trying to find ways to get through a system that was not meant for us to succeed in. For example, some schools in South Central don’t even offer the advanced math courses needed to meet the requirement. The next generations may have to burn the candle at both ends just to be considered to attend a Cal State.

Many students are pulling out all the stops already by taking extra classes and having to foot the bill for their education at a higher rate than their more well-off counterparts. Underprivileged kids are left with wide equity gaps when it comes to the funding of their public schools and the courses available to them, and this proposal would do more harm than help. The CSU is known for being a more attainable option for students that are not high performing in high school, and the quality education at each of the 23 CSUs are seen as redemption for students.

“CSUs are below-tier universities, and so they are for students who did not do well in high school, so this passing (of the new math requirement) essentially goes against the point of going to a CSU,” said Venice senior Thomas Koon.

The proposal is essentially stifling the chances for students in low-income neighborhoods and in rural or smaller areas who don’t have access to an extra quantitative reasoning, statistics or computer science course at their perspective schools. There has also been some confusion about the new requirement.

“I am graduating in the Class of 2021, and although my dream school is within the UC system, I am confused as a high schooler because the Cal State is considering requiring something that doesn’t align with LAUSD requirements,” said Venice junior Karen Nava.

“Kids from where I am from will have to keep acting as if they are crabs in a bucket, clawing to get out from the poverty they face everyday,” said my mother Charline Nunez, who is also a CSU Dominguez Hills graduate.

The decision-makers need to realize that they are serving students who not only may not meet the new criteria, but also may feel as though they are being overwhelmed and overworked. High schoolers in general suffer from abnormally high levels of anxiety as well, so their mental health may be impacted in a negative manner. Everything about this is intersectional. Nothing is affected independently of the other, and so students will have to take extra measures to make an adjustment.

The timeline of this proposal is as follows: in August there will be a public hearing; in September there will be a formal, detailed plan to CSU trustees and in November, an official vote will be made by the CSU board. The board set the schedule for 2026 because of the controversy surrounding the issue, and many voices (including mine) are getting louder and more unified as time comes closer for a decision to be made. A lot is riding on this vote and the parents and students of the incoming freshman class in 2026 will endure a much harder admissions process than before. So with that being said students, be prepared to be more involved than the previous CSU applicants in the upcoming years. Consider going to one of the hearings.

Hopefully the proposal does not pass for the sake of thousands of disadvantaged youth.