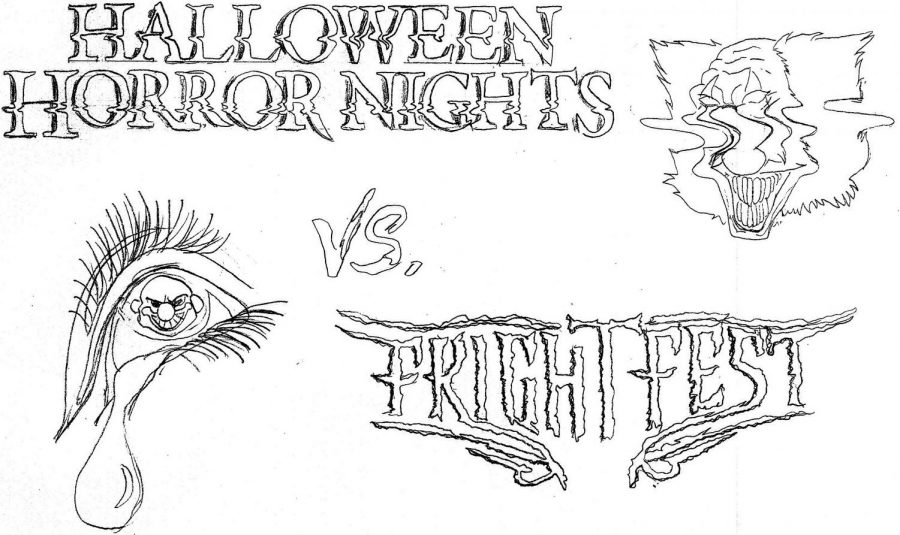 As the Halloween season approaches, the public’s  favorite amusement parks are undergoing spine-tingling transitions and are being taken over by things you think you would only see in your nightmares. It’s time for Six Flags’ annual Fright Fest in Valencia, as well as Universal Studios’ annual Horror Nights in Universal City. Both are guaranteed to give you a scare, but the question is which would you rather attend?

When asked their opinion on either of the parks, senior Za’maya Palacia says that she  recommends Fright Fest, but only if you think you can handle a scare.

“There was zombies, clowns [and] all different kinds of monsters, but if you’re a jumper or a runner I don’t recommend [going] because they do chase you.”

However, Venice alumnus Andrea Deleon  says, “It depends on what you like. If you love big, scary rides and a little scare, it’s Fright Fest. If you love big scares and walking around through mazes, it’s Horror Nights”.

Fright Fest this year kicked off on Sept. 14 and will run until Nov. 3. Horror Nights took a spookier approach and started their haunting on Friday the 13th of September, and will end on Nov. 3. That gives you several weeks to visit either of the scare grounds, so you will have plenty of time to get in on the fun.

This year Fright Fest has added another infamous maze as well as the new thrilling attractions “Sliders of the Night” and “Vault 666 Unlocked.”

Fright Fest sliders. “Monsters don’t just creep on you, they slide,” writes Juliet Bennet Rylah on the website LAist. “With metal plates strapped to knees and gloved hands, they effortlessly and speedily move across the ground and right up into your face.”   The 15-minute spectacular showcases synchronized tricks, jumps and all around controlled chaos.

The new maze, Vault 666, has a new chilling backstory about a couple who owned an old antique shop and are blamed for mysterious disappearances of the townspeople. Some believed the disappearances were related to evil trinkets that were being held in the vault of the antique shop. Your only goal is to make it out alive.

Universal Studios Horror Nights does what they know best and bases their attractions around your favorite and most terrifying horror films and shows. This year’s pick consists of mazes revolving around seasons two and three of Stranger Things, Jordan Peele’s Us, along with eight other thrilling mazes to fulfill all your scary needs. Horror Nights will also have a special BeetleJuice-themed Throwback Thursday dance party for the whole season, in addition to their five scare zones around the park.

Both parks have their perks and will be around until the beginning of November so there is plenty of time to decide which park you want to visit.