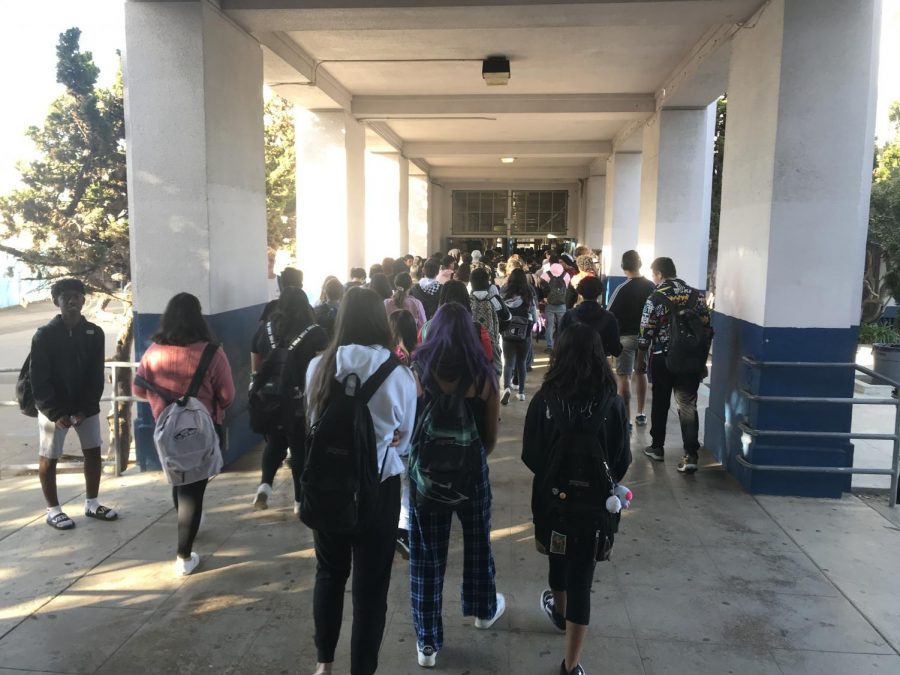 Students lined up outside the Main Building because they had no place to take the PSAT and testing had already started.

The administration of the PSAT test that was supposed to be given to all freshmen, sophomores, and juniors on Oct. 16 was poorly organized. The day of the exam, lines of students were crowded into the main building hallway and stretched out the door as they waited to be told whether they were going to test or not. At least 100 students were not able to take the PSAT.

“I ended up getting three summons for three different classrooms,” said junior Amelia Zapata. “I went to one of the classrooms and the proctor told me to go to the library. I showed up to the library and I thought we’re just gonna take the test there. But it was already weird that we didn’t take it in our second period, because that’s what we’ve done every year. The librarian ended up telling us that we weren’t taking the PSAT.”

Juniors rely on this test for practice as well as the opportunity to get large scholarships for college. Many schools, including Venice, want to be more progressive and have freshmen and sophomores be exposed to the test, said Principal Gabriel Griego.

The testing chaos and confusion was brought on by multiple issues. Students lost tesing time because they were sent to the wrong place. There was also a big mishap with the number of testing booklets that needed to be ordered for all students to take the test, said Mr. Griego. The College Board didn’t provide enough booklets for all the students. Once the testing team, Ms. Y. Hairston-Truitt and Mr. Dom Flores, realized this, they communicated with the College Board. They were then promised that the tests would be at the school a day before Venice was scheduled to take the PSAT, Mr. Griego said. But the testing booklets did not arrive in time.

The College Board set two dates that schools could proctor the PSAT, Oct. 16 or Oct. 30. The staff was already ready for Venice to test on the 16th and senior activities had already been scheduled, so they had to move forward instead of postponing the test date to the 30th. Most students did take the test without any problems, said Ms. Hairston-Truitt.

“Nobody really knew where they were supposed to go,” said junior Genevieve Marino. “And not even the teachers really understood what was going on. And there was a lot of confusion with the room numbers. It’s upsetting because a lot of people have the opportunity to get a scholarship. And it doesn’t make sense that they’re not allowed that opportunity because of the confusion and something that was beyond what they could control.”

According to LAUSD, the PSAT does not count towards college admissions applications, but the district gives it for free because it is an important way to practice for the SAT and is an important indicator of college readiness.

“Testing in general at a school of our size is a huge feat to accomplish because of the number of different needs and grade levels and students testing and not testing at the same time,” said counselor Ms. Jamie Simon-Meyer. “So it poses a lot of challenges.” She did not want to talk about her experience as testing coordinator two years ago.

Last year and most previous years, students usually took it in their second period home room with the exception of classes that had different grade levels. But this year, the school decided to organize test-takers alphabetically.

“I think it’s better to have the PSAT tests given by second period teachers with their classroom because it’s less wasted time moving from place to place,” said history teacher Mr. David Silberman. “And I think it’s easier for test security.”

Chemistry teacher Esmeralda Lopez explained how she wished there was more guidance for teachers from the administration.

“As a first-year teacher, I felt like I was tossed into it. It became chaotic in the morning when I had 10 extra students who didn’t have a Scantron and who weren’t even on my roster. They spent almost an hour trying to figure out where to go and get their Scantrons ready,” Ms. Lopez said.

Others, like Dr. Renysha Scott, who was last year’s testing coordinator, wished there was more support from the district for these important positions.

“I didn’t feel support from the district. I really think that it [testing coordinator] needs to be a district bind item position,” Dr. Scott said when asked about her experience as testing coordinator last year on top of her job as a college counselor.

But some students and teachers’ PSAT experience ran without any problems. In fact a majority of students took it without any issues.

“My PSAT proctoring experience was very smooth,” said Italian teacher Ms. Willcox. “Only two people were absent from my list and all my other students had labels which made it so much easier than last year when we had to bubble in everything… We finished right on time.”

There was an alternative testing day on Wednesday, Oct 30 at Westchester High School under charter school WISH’s testing. Students who weren’t able to take the test on the 16th were given the opportunity to take it at the expense of missing another day of instruction and having to be bussed to a different school.

“There are 65 spots available because there’s a library at Westchester that can host 65 students,” said Principal Griego. “Right now we’re only taking 40. We ordered two buses but now we’re probably only need one. We’re just trying to be prepared,”

Principal Griego did take fault in the predicament

“I’m going to do a better job myself, because I have a lot of experience in testing, working with our testing coordinator to make sure that everything is done and we’re communicating with the College Board and doing whatever we have to do in order to have a better system,” he said. “I know they were meeting but maybe there wasn’t enough facilitation on my part to support them.”

“It went well,” said Amelia Zapata. “We took the test in the library of Westchester High. It was just kind of disorganized and unconventional to have to go to school early to be bused to another school to take the PSAT because Venice messed up. Worst of all, we didn’t get lunch.”