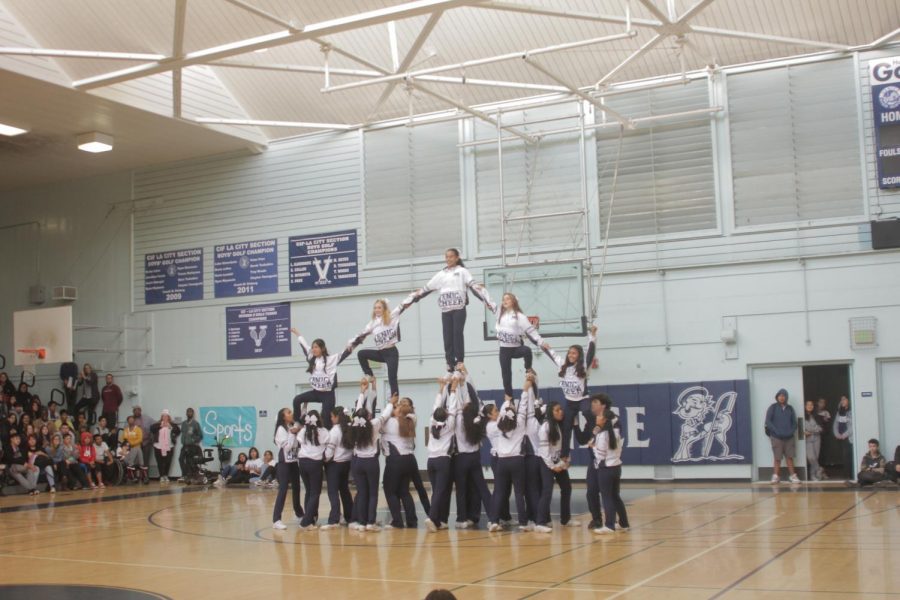 The first Recognition Awards in 10 years was held on Nov. 21. This award ceremony was established to recognize students and teachers in the school for their accomplishments and involvement.

The ceremony allowed students to be acknowledged for achievements such as an improvement in academics and GPAs, as well as behavioral improvement and perfect attendance.

Teachers were asked to send in a note to recognize students who they feel deserve recognition.

“It’s just to boost school spirit, boost the excitement about education, about wanting to do well, because kids want positive attention,” said ASB Leadership Adviser Sophie Sabbah. “They really do, and they may not be getting it at home. Maybe we’re the only ones who ever say ‘hey I’m proud of you, Congratulations!’ That can really turn a kid around. And that’s the purpose.”

The recognition awards took place during double fourth period. The awards had performances from the cheer and dance teams with leadership staff in the mix, band and color guard. Leadership recognized the new teachers at Venice along with various sports teams and major clubs that contribute to the school.

Another recognition rally is planned for the spring, recognizing the spring and winter sports as well as more students who have improved. Teachers who are retiring will also be recognized.

The recognition rally didn’t go as planned as Ms. Sabbah and some of the leadership students felt it could have gone, but they all kept an optimistic view as it was the first of many in a long time.

“It went as well as expected for the first one in 10 years (I used to do them last time I ran ASB). It went 85% as planned, sound system didn’t project clearly, unfortunately,” said Ms. Sabbah. “And we were a little disorganized when giving out the recognition. The purpose was to bring pride and excitement to Venice, by recognizing those who work hard, improve in different areas, and to bring pride back to our school. It was a lot of work! Especially for just one advisor and a handful of students to pull off. We did a spectacular job!”

The leadership staff has plans to improve the recognition rallies as they move forward.

“The recognition rally went pretty well, due to the fact it was the first one of this semester,” said senior ASB President Breanna Mixon. “The purpose was to recognize students, not the ones who are praised on the daily, but instead those who have improved the most. It didn’t really go as planned, but overall it wasn’t too bad. I feel like although it didn’t go exactly according to plan, it went well.”

Another Leadership member Kimberley Raygosa shared her thoughts on the first in a while awards ceremony. “We did this event to show them that we appreciate them for their hard work. It was the first time in a long time that the school had a recognition rally, so I didn’t know how it was going to be. I believe it went pretty well. There is always room for improvement.”

Students who were recognized shared their thoughts and critiques on the awards and how it made them feel.

“I felt great when I was recognized for being a most improved student,” said senior Lyle Yoergler. “The envelopes and bags that were given were not named and the certificates and coupons were just left blank. I feel like next time there should be the name of the individual who received the award for most improved student either on the bag or in the certificates/ coupons. Other than that I thought the recognition rally was quite good in the way that it helps motivate students to work harder academically.”

Other students were taken by surprise to being recognized and appreciated it. “I was surprised and felt encouraged to work harder academically,” said senior Salvador Quintana.

“The next rally in the spring will be much better as each one after that will continue to get better and bigger!” said Ms. Sabbah.