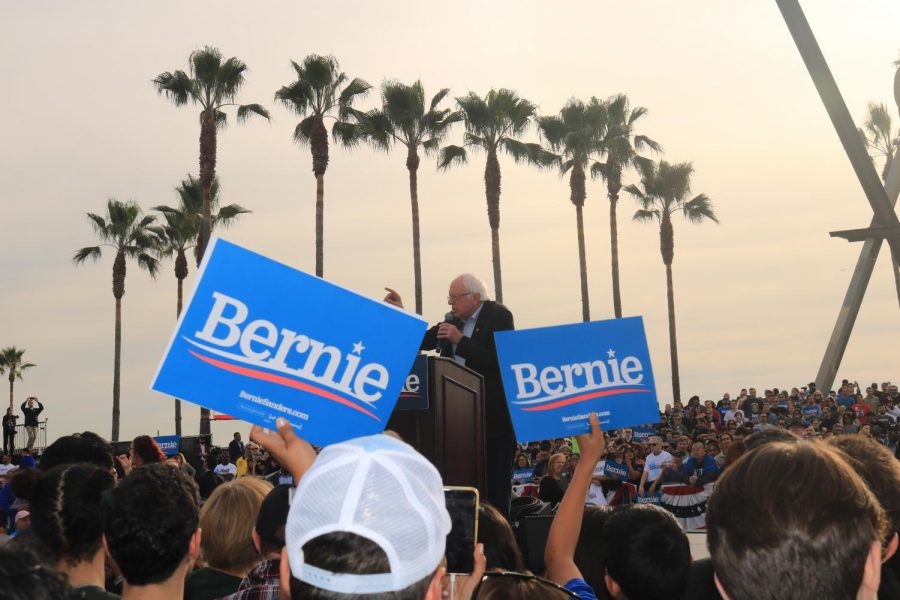 The rally for candidate Bernie Sanders began at 1 p.m. Me and my photographer, Rah-San Bailey arrived at press check in at 10 a.m. After finding out that the woman behind the check-in table was a Venice alumni, I was able to get my name, along with my photographer’s name, added to the list. Only a limited number of journalists were allowed on the list, and we were some of the few. The crowds of paying supporters reached well into the thousands.

After a few hours of waiting around the rally location on Venice  Beach, some local bands took the stage. The first was Local Natives, then Jesse+Joy, then Young the Giant. Then Students Organizers LA, a group of students who organize political events locally, spoke about Sanders.

During the rally, we saw many famous locals, Treemanity, The Santa Blogger, and Herry Perry to name a few. All of the sudden my photographer had disappeared from my view, I later found out he had passed out from dehydration. This is a PSA: drink your water. Before Sanders spoke, nine people took the stage, including Los Angeles council member Mike Bonnin, former California state senator Gil Cedillo, actor Tim Robbins, political philosopher Dr. Cornel West, U.S. Representative Alexandria Ocasio-Cortez, Sanders’ wife Jane O’Meara, then finally Sanders. They all spoke of a better future for our country, and said Sanders was the cement that would pave the path.

Sanders spoke of a better future for the workers, the poor, the students and the sick. It may just be political banter, but Sanders seems like a real chance at a much needed improvement for our country. He has a legitimate plan for the country. The plan includes helping the poor out of their rut, and recreating the quickly dissipating middle-class. Many homeless came to show their support; some came to yell at the speakers.

In a world like our own, someone can’t just say they stay out of politics. Politics are just too important to be neglected.

“We need you,” said Sanders. “I can’t win this by myself. We need support from people like you,” he told the crowd. Sanders campaign runs on small donations from grass root donors. He has yet to take a single donation from a big-wig billionaire.