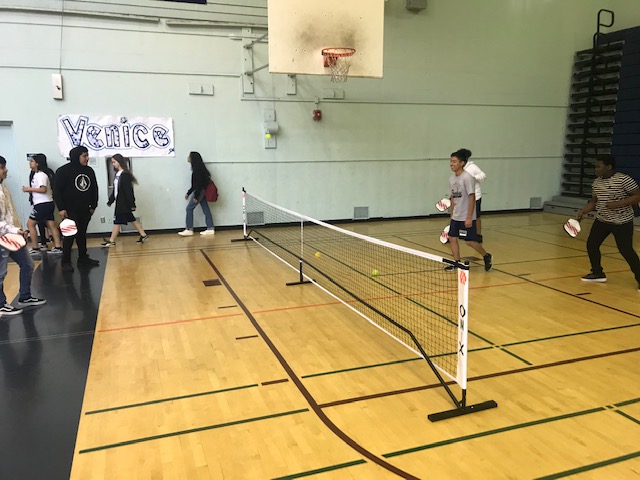 A new sport has arrived at Venice High School: pickleball. A combination of other paddle sports, pickleball is played by hitting a wiffle ball with a paddle to the opponent over a 34-inch high net, similar to tennis and paddle tennis, on a smaller 20-foot by 44-foot court.

Like badminton, players serve underhand, and the score of the game goes up to 11 points in a similar scoring manner to volleyball. But none of this would’ve been possible without Mr. Steven Hosohama, a new P.E. teacher at Venice High School. He is also the USAPA Pickleball ambassador for the Venice area.

“Pickleball is one of the fastest growing sports in the country,” said Mr. Hosohama. “After the fitness gram tests are over, I hope to make it a daily activity.”

Since Venice High School currently doesn’t have any tennis courts, the sport is being played in the gym every Friday, when the students can freely choose their activity. With a grant from the Venice Student Alumni Association and $150 from an outside donor, Mr. Hosohama was able to purchase 50 paddles and three net systems.

“My goal is to have eight net systems.” said Mr. Hosohama. “That way, students from any class can all participate.”

However, pickleball will remain as a P.E. sport for now and not a team sport, as not enough schools within the city are doing pickleball. Right now, Mr. Hosohama is trying to raise people’s awareness of the sport.

“Who knows, maybe there will be a school team one day,” said Mr. Hosohama. “But right now, I am just trying to get more and more people to be involved with pickleball.”