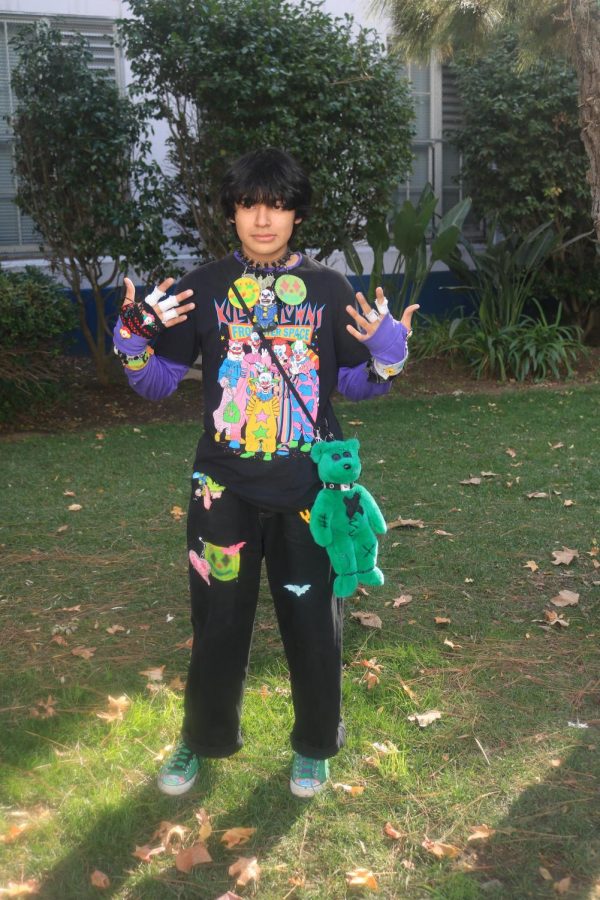 In this edition of Gondo Drip, the Oarsman pursues a very stylistic Gondolier, Salem Mendez. You might not know who Mendez is, but you’ve definitely seen the sophomore, with his daily clown and horror-themed outfits and accessories that might frighten some of the adults and students on campus. His style is one that is very trendy and garners lots of attention.

On this day in November, starting from the top, the accessory on his neck is a clear plastic choker with small black spikes on it. Then under it, he wears a black plastic chain to which he clips numerous accessories, such as pieces of felt with clown faces drawn on them, a skeleton panda figurine, a white translucent bat toy, and a very scary clown figure with red hair and a blue and yellow outfit.

For his shirt, Mendez is wearing a vintage movie tee from “Killer Klowns From Outer Space.” Under it, he is wearing a basic purple long sleeve T-shirt.

Across his body, he is wearing a satchel that connects to a big bright green teddy bear, complete with black scars hand drawn on it, pins in its ears, and a black and silver choker too.

Something we have not seen before at Venice High, are wrist accessories of Mendez’ style, but Mendez covers all the bases, with his wrists and hands being extremely accessorized. Some of the more attention-grabbing accessories on his wrist are a black Jack Skellington bracelet, a white felt bracelet with clown faces hand drawn on it and plastic eyeballs attached to fabric bracelets.

Mendez is wearing black canvas pants. With no surprise, they are accessorized with felt pieces and clown faces drawn on them, and little bat figurines.

Mendez said that he doesn’t consider his style to fit into any category. He says that his biggest style influences are clowns and clothes surrounding his favorite colors, green and purple. Mendez says that he also gets influences from the movie “Alice In Wonderland,” especially the character the Mad Hatter.

He says that he gets most of his fashion influences from Instagram influencers who dress similar to him. An example of one of them would be Jess Girillo, otherwise known as @froglady444. Girillo possess the same aesthetic as Mendez and they both sport heavily accessorized and clown and horror-themed outfits. Mendez is also inspired by the DIY aesthetic, as he makes the majority of his own accessories, which he does because he considers it to be “fun.” He said that one of the first accessories he made was “a face out of felt.”

Mendez told us that he only shops at thrift stores.

The Oarsman asked Mendez if he gets any attention or reactions because of his outfits. He says that some people look at him weird, and that some freshmen tend to give him “judgy” looks. But he says he doesn’t really care what they think and that he doesn’t care for any attention and really doesn’t like being complimented.

The Oarsman asked Mendez how he feels about the term “E-Boy,” a term used to describe people who dress in very dark and Goth clothing and who wear lots of chain and gothic accessories, usually have multicolored hair, and who all-around dress very similar to Mendez. Mendez however doesn’t consider himself to be an E-Boy and in fact he said he doesn’t want to be considered one.

Mendez said that his favorite part about his outfit was all the clowns on it, as he is very infatuated with clowns. Although Mendez is completely fine with what he wears, he thinks his outfits would definitely be improved if he had platform shoes.

When the Oarsman asked Mendez what his family thinks about his style, he said “I don’t wear this when I’m with my parents.” He said he dresses the same way, but with none of the accessories.

Mendez didn’t have any style wisdom to give to Venice students, but the Gondo Drippers would just like to tell you to be yourself, dress how you want, and if Mendez can do it, you definitely can do it too!