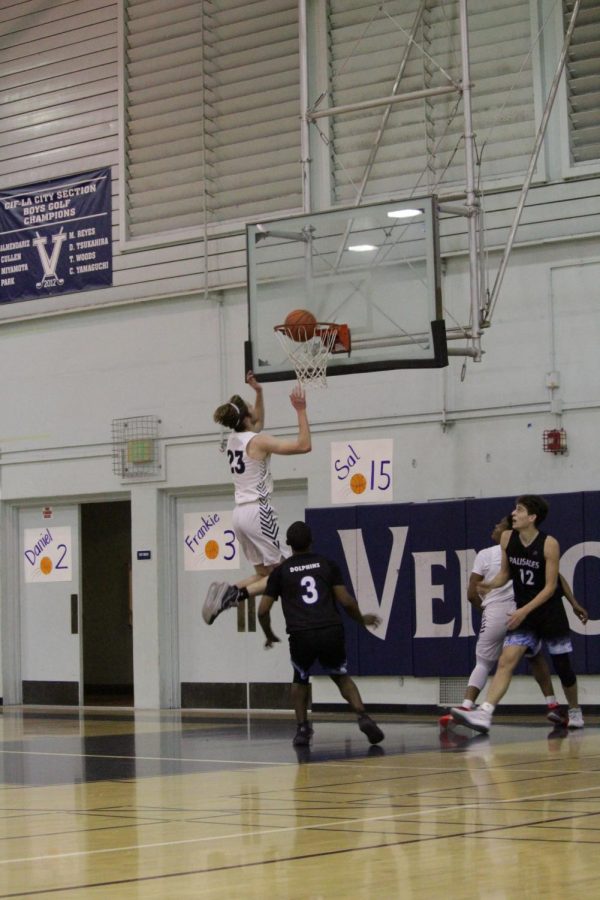 As the season comes to the end, the boys varsity basketball team is pleased with how they’ve closed out this season.

“ I honestly feel like I had one of the best seasons at Venice High, but if it was possible for me to go back in time, I would steal all the games that we should’ve won in the past season and claim them as ours,” said Varsity Captain Ja’sean Johnson.

In fact it was a steal that Johnson made at the end of their game against University High school that led to Gondos most exciting win of the year. With only a few seconds left in the third over time, Johnson stepped in front of the a university pass, stole the ball and raced to the hoop and made a layup as the buzzer sounded.

The team is tied for fourth place in the Western League, with one defeat against University High School as well as two against LACES and Hamilton High School.

“It was an interesting season and although we were about one or two games away from what our goal was, we were still pretty close,” said Coach David Galley.

“They’re fine additions, they help out and since they’re new players on the team, they must play as good or better to keep on track with the rest of the players and to get quality minutes in the game,” said Coach Galley.

For some players, it’s the beginning of a new stage of their lives, for others, they’re concluding their last season in their high school career. While some may continue to advance in basketball,  others are ready to discover a new direction in their life.

“I don’t think I will continue basketball seriously, at the college level maybe, but I’ll just do it on the side for fun,” said Varsity Captain Frankie Sandoval. “I plan to go to a university and get a degree and see what happens from there.”

From the beginning to the end of the season, the team members have pushed each other and discussed how they can work together to succeed in their upcoming games.

“Whenever we go out to eat, we talk about how we can make the team better as well as what we can try differently during practice, and how we can improve our role to be more successful,” said Sandoval.

As the seniors soon become graduates, they have been mentoring the younger athletes on the team so that they too can soon take their place as rising leaders on the team.

“Since the beginning of the season, I’ve been giving the incoming freshman tips about their freshman year and how to overcome it like what to do or what not to do and it’s all about basketball,” said Johnson.

Those players seemed to take that advice as the freshman and JV teams both had successful seasons. These are the players that Venice will be dependent on next year as most of the varsity team will graduate.

“ I’m really proud of the seniors this year, we had nine of them in total and all of them contributed one way or another and we have three or four start every single game, and we will miss them greatly, ” said Coach Galley.  “As a whole, the attitude and practice was great and the effort over all was phenomenal, hopefully the younger guys can learn from that effort and build on it.”

As of right now, the varsity team is in the 9th seed and on their way to playoffs.