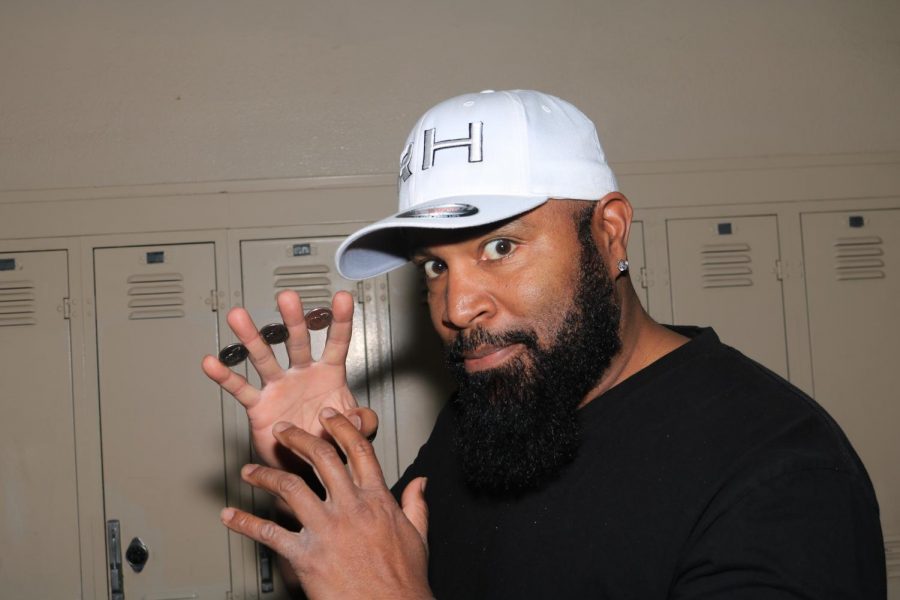 Rick Hulland, also known as "The Magic Man" intrigues with his many visual illusions.

Magic: having or apparently having supernatural powers. The ability to perform illusions, a craft that is mastered over time and practice.

Only a few can really possess the power of magic, and someone who does works right here at Venice High.

Rick Hulland, also known by some students as the “Magic Man,” is an assistant for special-ed students by day, and a talented magician by the afternoon. The Oarsman interviewed Mr. Hulland to find out how he got into the world of sorcery and why he decided to bring his ability to his day job.

“I got into magic because one day, a friend of mine did an illusion for me,” said Mr. Hulland, “And the moment he did that illusion, I was blown away. And from that moment on, I was like, I have to find out how it’s done. And that’s basically how I started to find a real love for magic.”

“He did a vanishing coin illusion…where you take a bunch of coins in your hand, and you make those coins disappear as you drop them into your other hand.” Mr. Hulland specializes in that type of illusion.

The Oarsman asked Mr. Hulland about his favorite tricks. “Close-up, close-up tricks are always good and they call it close-up magic and coin magic. That’s magic where you do coins, and you’re close up.”

Mr. Hulland does these kinds of tricks because he believes close-up magic is much more powerful than any other type of magic because of how “close up” and personal it is.

“It’s more powerful because you get an opportunity to kind of see it. So it’s real close up and personal. Whereas if I’m doing something from here (far away), you guys are like he tricked me…Whenever you do magic you don’t want people to feel like they missed it. You really want the mysticism to be, ‘God, it really felt like real magic.’”

A magician such as Mr. Hulland had to have some magical inspiration from somewhere, “Do you have any magicians you look up to?” “(David) Copperfied, Chris Angel, all of them…how can you not…when you see it, you can’t help but enjoy it.”

Venice students who are infatuated by magic and are curious to see what Mr. Hulland has to offer can visit Room 106 and ask him to do a few tricks.