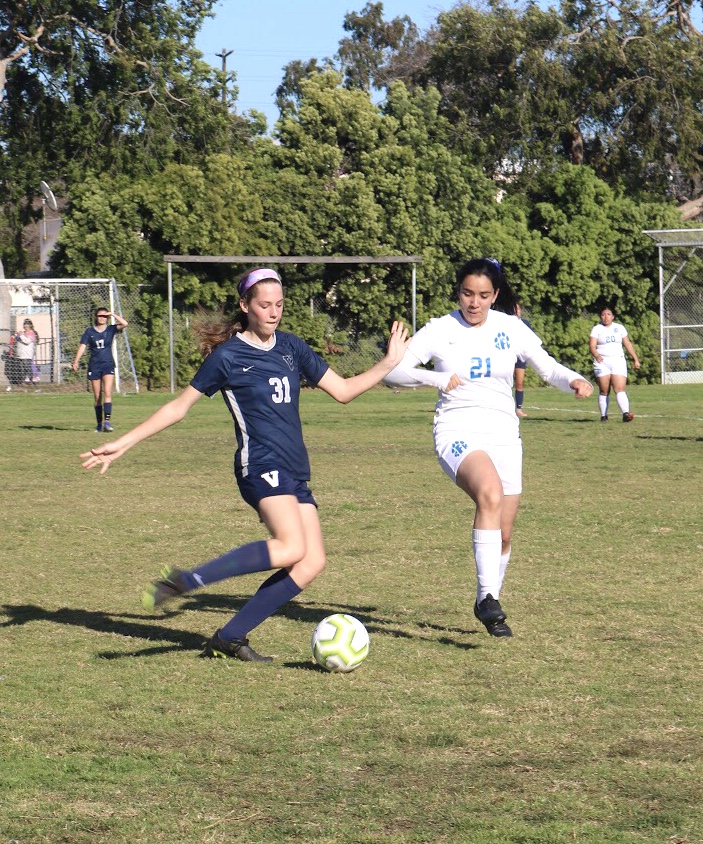 After knocking out Bernstein High School and Alain Lenroy Locke College Preparatory Academy in the first and second round of playoffs, the Venice girls soccer team defeated Robert F. Community in the semi-finals on Feb. 25 to advance to their second consecutive city finals. They proceeded to the state finals on March 3, but lost to Torrance 3-0.

Over the course of their playoff run prior to the finals, the Gondoliers had been playing outstanding defense, allowing none of their opponents to rack a single goal. In the city championship game against Maywood CES, last year’s finals opponent, the Gondoliers got off to a hot start racking up three points in the first half, and their defense showed up once again, holding their opponent to no goals. By the second half, Maywood CES attempted a late push scoring two points, but their effort wasn’t enough. The Gondoliers have captured back-to-back Division IV city titles.

Coach Chaka Forman, who took the team to its first ever CIF championship in Venice High School history last year, is extremely proud of the team’s great accomplishment.

“Back-to-back titles are really special,” said Forman, who started coaching the team last year, “We set our sights on this back in October, so it’s really amazing to see it through.”

Forman also points out that besides talent, hard work and love for each other were keys to their second straight championship.

“We believe in each other and so our girls play for each other,” added Forman. “The girls are tired of being looked past, and they did everything it took to get to the front of this season. We are talented, hungry, calm, and united. We shared a goal, and everyone takes accountability in that process.”

“I feel good about it,” said Aguilar. “It shows us how much hard work both Chaka and the team put in. But it also comes with a lot of pressure to win again.”

Aguilar also pointed out that the key to success was being able to forget all of their problems and just play their hearts out as one.

“Our season overall has been great, as we became a more developed and focused team.” said sophomore Julia Pioli. “With our determination and eagerness, we were able to win another title and many more games than last year. Throughout the season, we were keen to step up to the competition and keep pursuit of supporting each other to become stronger together. The immense drive to excel is still active and we will continue to improve our next season together. One love.”

Eventually, the Gondoliers went on to lose the state finals 3-0 in Torrance. Despite this, the team looks to work harder than ever and prepare for next season.

“We will enjoy our victories,” said Forman. “Life is a continuous exploration of our collective greatness and we won’t stop growing. We will try to see next year through the eyes of a child, fresh and new, and allow the wonderful possibilities of the infinite to permeate the soul of our team.”

“I will go to all the team practices, work out outside of practice, and eat healthier,” added Aguilar. “But I’ll also spend more time with the team. We like having healthy conflict outside of the team and everyone enjoys hanging out including Chaka. It really helps us on the field because we trust each other and what the other has to say.”