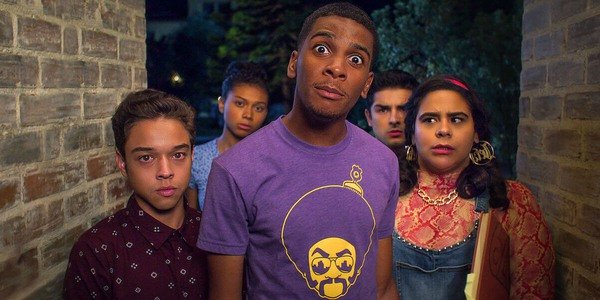 On My Block cast

After over a year of anticipation, Netflix’s hit dramedy series “On My Block” premiered for its third season on March 11, finally answering fans’ questions about just what happened to the “Core Four,” which consists of protagonists Monse Finnie, portrayed by Sierra Capri, Jamal Turner, portrayed by Bret Gray, Cesar Diaz, portrayed by Diego Tinoco, and Ruby Martinez, portrayed by Jason Genao, at the end of season 2.

The show, set in a fictitious inner-city in LA, follows four high school sophomores who just want to protect each other.

The protagonists ended Season 2 by getting kidnapped by mysterious figures in black ski masks. This season, the kidnappers are found to be puppets of Cuchillos, portrayed by Ada Luz Pla, the leader of the gang that Diaz is a part of.

After a killer takedown of a rival gang at the hands of the Core Four in season 2, Cuchillos has another mission for the group to take on: finding the love of her life.

At first, this seems like a seemingly simple request, with only one problem standing in the group’s way: the love of her life, Ricardo Galindo, known by the town as Lil’ Ricky, is presumed dead and has not been for over twenty years.

And so begins the hunt for Lil’ Ricky, whose success or failure could quite literally mean life or death for the group of teenagers. Being at the mercy of a gang boss, the group is faced with a dilemma that leads them on journeys to an extermination office, a music video set, and even digging up a grave, all to find a man who no one has seen since he vanished.

Such an interesting central objective made the eight-episode journey one that many fans, including Venice junior Amani Shahid, enjoyed. She said, “I loved seeing the Core Four solve mysteries and issues like only they know how to.”

Apart from finding Lil’ Ricky, this season of “On My Block” also saw expansive character development in the recurring characters of Jasmine Flores, portrayed by Jessica Marie Garcia, an acquaintance turned friend of the Core Four, and of Oscar “Spooky” Diaz, portrayed by Julio Macias, Cesar’s brother, both characters who had been overlooked in the first two seasons, a welcome addition to the well-established lives of the main cast.

These characters shine in this season and break out of the stereotypes their storylines trapped them in previously. The older Diaz was shown dealing with the return of his incarcerated father and the aftermath of his internal desire to break away from gang life, and Flores became a headstrong, confident young adult in this season, separate from her the previous typecast she was stuck in in seasons 1 and 2.

Another juicy addition to this season is the increased probability of a group breakup, spurred by Finnie’s likely departure to a boarding school across the country. Mounted by petty friend group drama, death scares, and a general trend of growing up and apart, the end of season three realizes what all “On My Block” fans have been dreading: the Core 4 being no more.

Although the acting in the show isn’t perfect, complete with the whining and petty arguments, the realism shown through it surrounding the eventual breakup of the main crew was one that made this season of the show special. Even though the disintegration of the Core Four was one that Shahid described as “painful,” it demonstrates how this show is able to appeal to so many.

Although no season 4 has been officially announced, Shahid’s sentiments have been echoed by almost all On My Block fans since the end of this season, with many anxious for what’s set to happen in the projective season.

Due to the character development, unique objective, and shocking ending, The Oarsman gives season three of “On My Block” 5/5 stars.